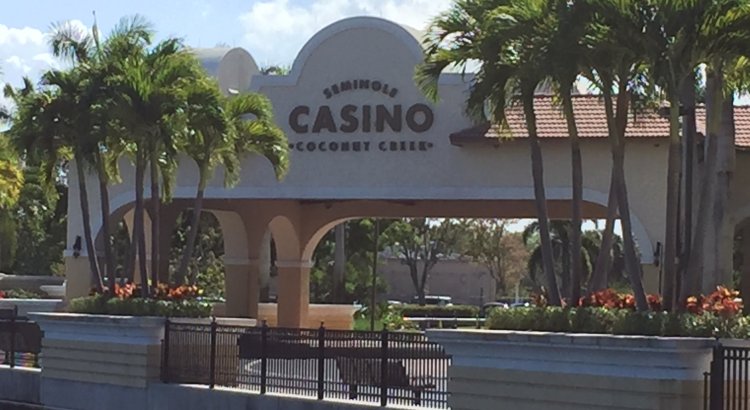 Our trip through South Florida was a whirlwind. It included a three night stay in Miami, followed by two nights in Key West, and finished with four nights in Hollywood Beach. The Miami and Hollywood Beach days included a lot of poker. In fact, we played at seven different poker rooms in seven days. We cover our experience of the Miami area lifestyle (as well as our Key West diversion) elsewhere. Here we want to share our experience with South Florida poker rooms. You can also find individual reviews of each of the seven rooms we played – Seminole Hard Rock Hollywood, Seminole Coconut  Creek, The Big Easy, Pompano Park, Magic City, Gulfstream Park, and Dania Beach – in our Room Review category.

We recently ranked the Top 5 poker rooms in New England (our home turf). However, with such limited experience of the South Florida rooms (a single visit for all but Seminole Coconut Creek), we do not feel qualified to create such a ranking.  Rather, we thought we would share key elements of the South Florida poker scene overall, including a  few standout aspects of various rooms.

Most dealers were fast, professional, and friendly. Perhaps the healthy and consistent activity (see Cash Game section below) makes dealing in South Florida a desirable job. Whatever the reason, the dealer quality was strong. Not quite Turning Stone strong, but always solid to excellent. 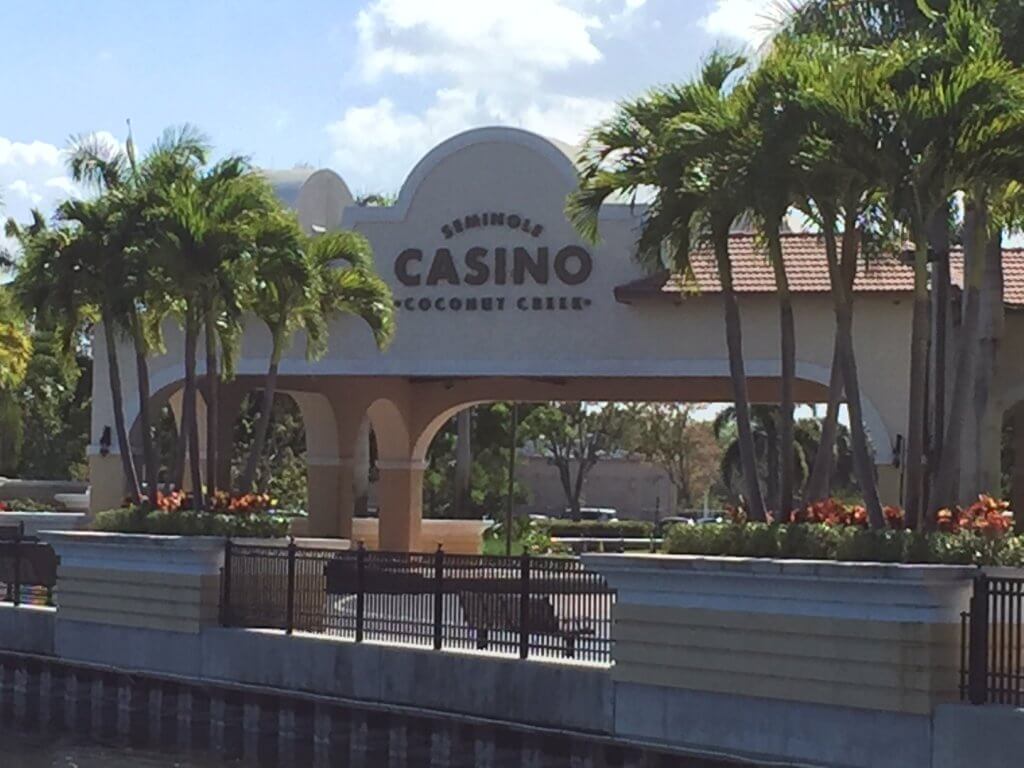 The player mix varied from room to room, with Seminole Coconut Creek skewing older and The Big Easy offering great diversity in age, gender, and ethnicity. Players at most rooms were generally friendly. Seminole Coconut Creek stood out most in this regard, and this was one of the reasons we played there twice. Coconut Creek’s Crazy Pineapple tournament was fun partly due to the openness and patience of the players. Understandably, dealers occasionally forgot to collect discards before starting to deal the turn. These moments were met with laughter and good cheer rather than irritation. Gulfstream had the most serious players among all the venues we played, and therefore felt the least welcoming.

If you love rebuys and innumerable, complicated add-ons, you’ll love playing poker in South Florida. Some rooms, like Magic City, feature tournaments with very short stacks and quick blind levels, encouraging fast action and repeated rebuys. Gulfstream Park offers unlimited rebuys to the end of registration and 3 different add-on options. The Big Easy’s “free” tournament offered 500 chips followed by a variety of add-on options from the get-go.  Blind levels were 15 to 20 minutes in most tournaments, so the combination of rebuys/add-ons and short levels made for a lot of crazy play. The gambling end of the poker playing spectrum will love this; others, like ourselves, not so much.

Dania Beach offered the craziest structure we have ever seen. The original buy-in was $60 for 10,000 chips, and whenever you fell below 5,000 chips you could add on $20 for 5,000 more. Many players availed themselves of this option repeatedly during the early stages. At break, there was an add-on of 50,000 chips for $80. Yes, an add-on 5x the starting stack! The tournament had nine players alive at break. Then eleven new players bought in for $140 and 60,000 chips apiece. Suffice it to say, the tenor of play completely changed. This was Dania Beach’s Monday tournament, and the exact structure of other tournaments vary. However, the 50K add-on is generally a part of most of their structures.

Tournament Rakes are More Insane than the Structures

If you navigate the gauntlet of South Florida tournament structures and manage to cash, you might be disappointed by the pot at the end of the rainbow. You’ll often hear poker professionals harp on the importance of knowing the rake. “Anything over 15% is impossible to profit!” some will shout. However, those of us playing local tournaments with entries below $200 know that the rakes will be higher, and we live with that. Poker is more pastime than profit opportunity when small tournaments are your base.

However, a pastime should not bankrupt you. Many of the South Florida poker rooms had rakes far beyond what we have seen before. Gulfstream’s tournament rake was 37%! Coconut Creek punched in in the low 30% range. Pompano Park seemed to offer a rake around 25% which we would usually balk at, but it felt like a welcome respite in the South Florida poker landscape. We breathed a sigh of relief when we returned to New England with typical rakes in the low 20s.

Due to the complicated rebuy and add-on structures, some South Florida tournament rakes were hard to calculate. Also, frankly, we stopped wanting to know exactly what was being pulled from the prize pool. Our fiscally conservative sides would have called an end to poker tournaments on this poker vacation had we looked too closely. How so many South Florida poker regulars can afford to play tournaments with such brutal rakes is beyond us. It seems like you would need to be a top 1% player to break even. To be fair, some rooms featured monthly point system awards and included tournament players in room-wide high hands. So that must help.

Unsurprisingly, South Florida poker rooms are valued very differently by their venues. At the two Seminole casinos, Hard Rock Hollywood and Coconut Creek, the poker room is considered an important part of a larger, profitable gambling complex. At the other extreme, Gulfstream Park’s bell cow is their beautiful racetrack. The casino clearly falls behind both live and simulcast racing in importance. And the poker room – dark, dingy, and tucked in the back – falls at the bottom of the heap of Gulfstream’s offerings.

At The Big Easy, the poker room seems a key element of the entire casino. It was even more active and vibrant than the slot areas. Magic City gives the poker room its own space altogether. The Magic City poker room feels like its own freestanding entity in a larger complex housing various activities. Dania Beach offers an attractive midsize casino with a nicely designed poker room, but not a lot of action beyond tournament regulars. Pompano Park is another midsize casino featuring more healthy cash and tournament volume. 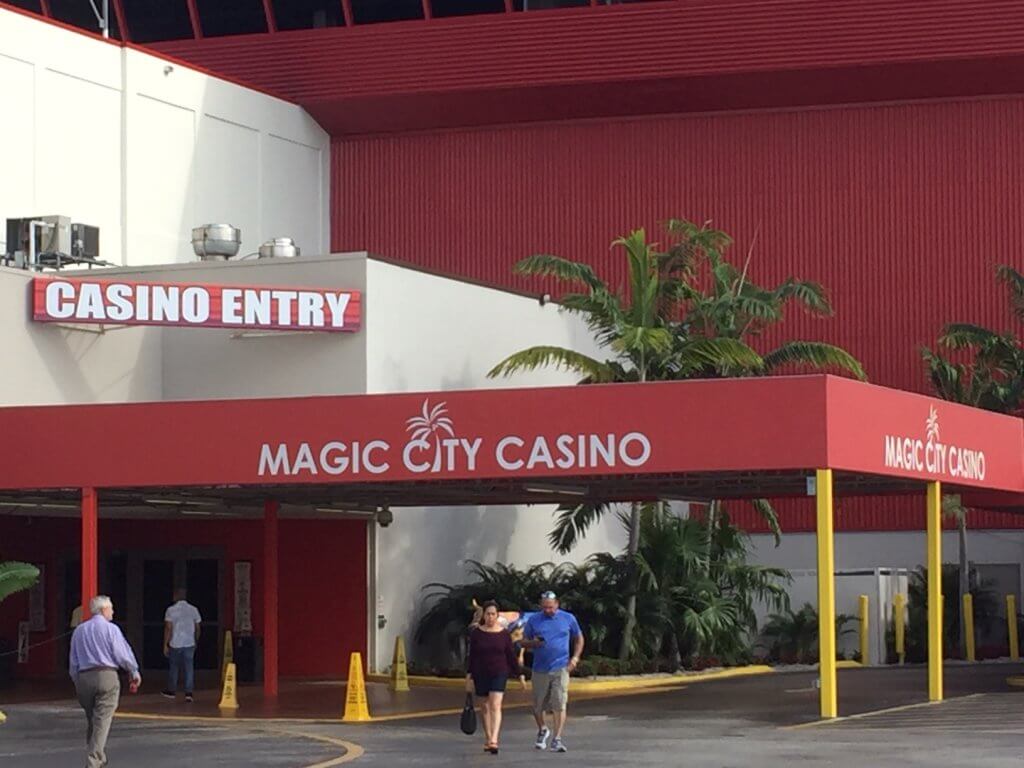 We spent a few weeks tracking both the cash and tournament activity across South Florida poker rooms. Most South Florida rooms have vibrant cash games, with the exception of Dania Beach. On a typical Saturday night, there may be 10 to 30 tables (with Seminole Hard Rock Hollywood at the high end) of cash going in a given room.  About half of those tables will be $1/$2 NLH.  While most rooms, especially the larger ones, fall off during weeknights, cash activity remains high. At some place like The Big Easy the drop off is negligible; they may average 15-16 tables on a Saturday night, and only be down to 12-13 tables on a Tuesday evening. The nightly “free” 7pm tournament may help to keep the volume steady. We have detailed activity for each individual room in that room’s Poker Room Review.

So there you have it: the pros and cons of the South Florida poker scene. We were surprised to find our poker experience in South Florida so different from what we see in New England. It was a great place to visit, but not quite our style for tournament play long-term.