The Seminole Hard Rock Hollywood poker room is the lion of the South Florida poker scene. With the highest national profile, it provides the most Vegas-like experience among card rooms in the region. And the Hard Rock is not sitting still. When we visited in March 2019 they were in the midst of a massive renovation, including the addition of a large guitar-shaped hotel. The casino’s construction is scheduled to be mostly completed in 2019, so we expect an even larger, more spectacular venue to develop in the future. For now, the existing one is nothing to sneeze at either.

The Seminole Hard Rock Hollywood poker room is just a 10-15 minute drive from the Fort-Lauderdale Hollywood airport. It lies on Route 441 slightly north of the junction with 848. The casino sits a fair distance from the coast and is more isolated from other attractions than more coastal casinos like Isle Casino Pompano Park or Magic City. As with pretty much everywhere in South Florida, traffic can be fairly heavy around Seminole Hard Rock. However, it is a full-service casino, so once you are there, all of your eating, drinking, and entertainment needs can be met on site. Although a far different climate and topographical setting, the Hard Rock reminded us of Connecticut’s large Native American reservation casinos: Foxwoods and Mohegan Sun. 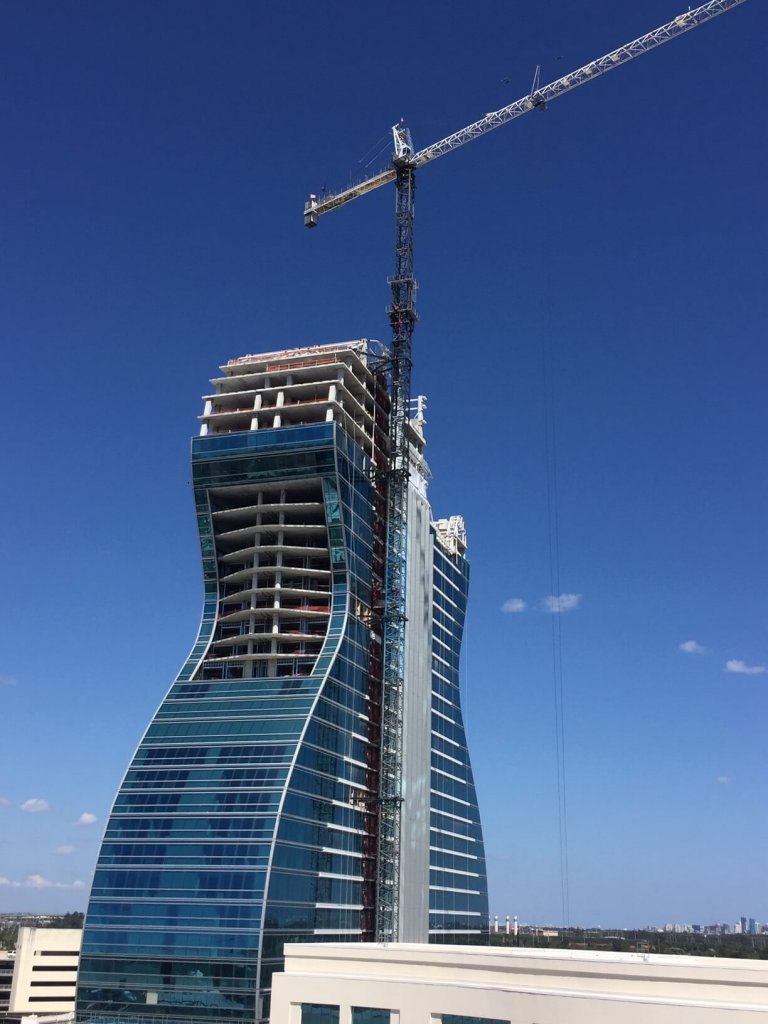 The Seminole Hard Rock Hollywood is large full-service casino. It has a 469 room hotel (and as stated above, an even larger hotel is on its way) and a 3,500 seat arena for concerts and other entertainment. The Hard Rock’s casino features over 2,000 slot machines. As one of Florida’s Native American reservation casinos, it is allowed to have live table games such as blackjack or craps, and features over 100 table games in all. Dining options range from a food court to higher-end fare.

We had lunch at the Blue Plate restaurant, which is very close to the poker room. Heather had the Sour Dough Grilled Cheese and I had the Tuscan Chicken sandwich.  Both were large and very good. The restaurant had a casual, but nicely modern feel with friendly and rapid service.

The 37 table poker room is a large square space with very high ceilings. It sits down a long hallway from the main gaming rooms. Sitting in its own space, apart from, the main casino, gives the room a very nice atmosphere. The sound, temperature and air quality are all great. The tables are nicely spaced, with no sense of cramping. The light was a bit dim but pleasant, and the cards are easy to see across the table. The room is nicely carpeted, with beige walls in an attractive faux wood design.  Per the Hard Rock motif, there are gold records framed on the front walls. There are also large TVs on the walls and suspended from the ceiling in the middle of the room.

The adjustable chairs are very comfortable, and felts are well maintained. Oddly the chips are showing their age, a bit worn but still distinct from one another. There are shufflers in the tables, which keeps play moving along quickly. 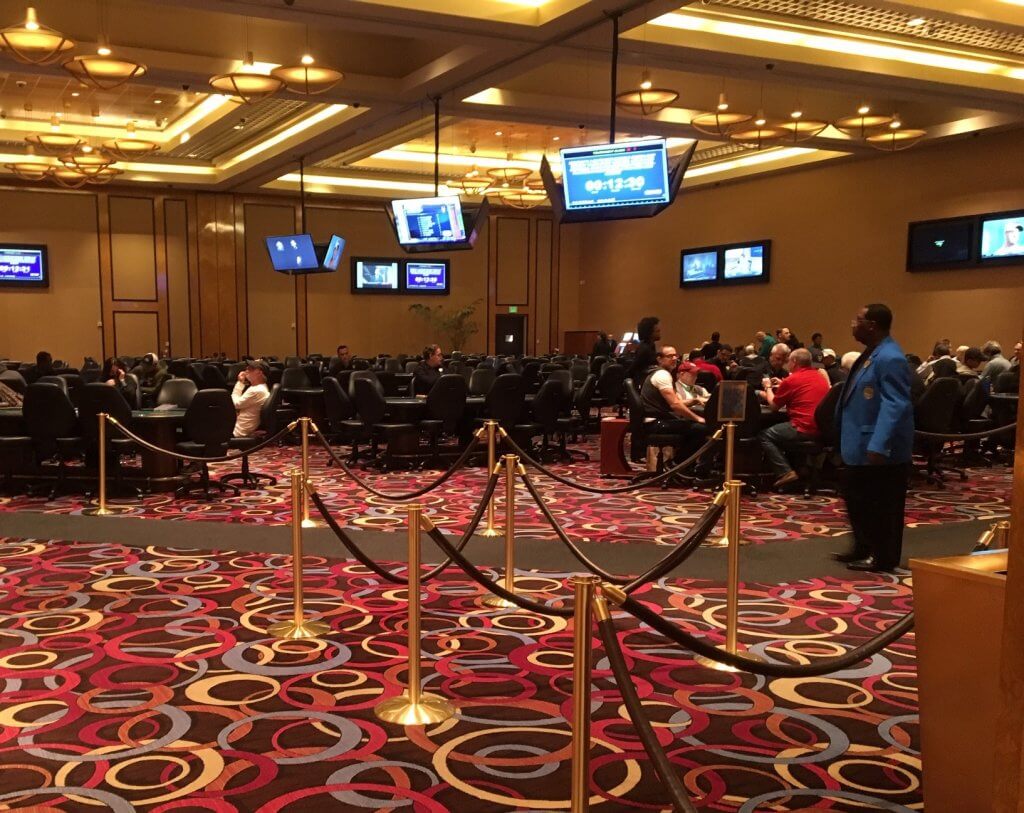 When we arrived there were computer issues (attributed to Bravo poker) that complicated the ability to register for the tournament and to obtain the necessary players card for newcomers. As the card room was unable to issue players cards, we had to go to the player’s club desk in the main casino to have it done. The poker room floor was nice enough to have one of the inactive dealers walk us to the player’s club desk. We thought that was a nice touch, and helpful because it would not have been easy to find!

Once we entered the tournament, the floor continued to be attentive and friendly. While I started out with a somewhat shaky dealer, in general the dealers were excellent. We never saw wait staff during our time there, but we played a mid-week 11am tournament, so there may not have been a big need for cocktail service at that point.

The player pool was fairly diverse in the small tournament that we played and throughout the poker room. The age spread was substantial, and there were several women playing both in the tournament and at cash tables. There were both local players and tourists like us in the tournament. There was also a range of playing styles. Most players at my table were tight, while Heather found hers to be loose aggressive.  My table was fairly quiet except for one very social woman, while Heather’s was loud, boisterous, and sometimes contentious. Some of the older players at Heather’s table became a bit cranky at times.

The Seminole Hard Rock Hollywood poker room’s tournament options are abundant. The daily calendar generally has at least two tournaments per day. While most have the standard NLH rebuy format, they also throw in a bounty tournament, 6-Max, and some Omaha to keep things interesting. Blind lengths range from 15 to 30 minutes in the daily tournaments.  Most tournament structures have a good combination of deep starting stacks and gradual blind increases to allow for plenty of time for solid play.

On top of their daily tournaments, the Hard Rock Seminole offers special series and events nearly every month. The World Poker Tour has a stop here for both their Main and Deepstacks tours.

Hard Rock Seminole’s fields can be very large on both weeknights and weekends. On Mondays at 6pm, there is a weekly 20K guarantee, which typically fields well over 100 players. You can count on 100+ players for many of the weeknight evening and weekend tournaments. One nice twist is that tournaments are eligible for high hand bonuses, and you only need to use one card to qualify.

While some other rooms in the area also have good tournament options, Seminole Hard Rock is the clear superstar.

The cash games at Seminole Hard Rock Hollywood poker room are no less active than the tournaments. On weekdays there are 6 to 8 $1/$2 tables, 4 to 6 $2/$5 tables  and 2 to 4 tables of other games going on. Friday and Saturday nights the volume jumps to 14 to 16 $1/$2 tables, 9 to 10 $2/$5 tables, and 5-6 tables of other games. On weekends, Seminole Hard Rock is the most consistently active cash venue in South Florida. Not surprisingly, we arrived to play a weekday late morning  tournament, cash was fairly slow. Three cash tables were active when we started the tournament.

Spacious, nicely designed and professionally staffed, the Seminole Hard Rock Hollywood poker room has much to offer. Seminole Hollywood feels a lot like the nicer Vegas rooms such as the Venetian or Aria.  Having its own high ceilinged space apart from the main casino floor is a distinct advantage for poker players who like that kind of separation and focus. We are two such players, so we found that very appealing.

We visited at kind of an odd time, a weekday late morning/early afternoon, so we lack insight into how higher volume times are handled. But the professionalism and customer-friendly focus regarding the handling of our technology glitches bodes well for how they handle any challenge. With vibrant cash games, a breadth of tournament options, and excellent player volume, The Seminole Hard Rock is unmatched in South Florida.