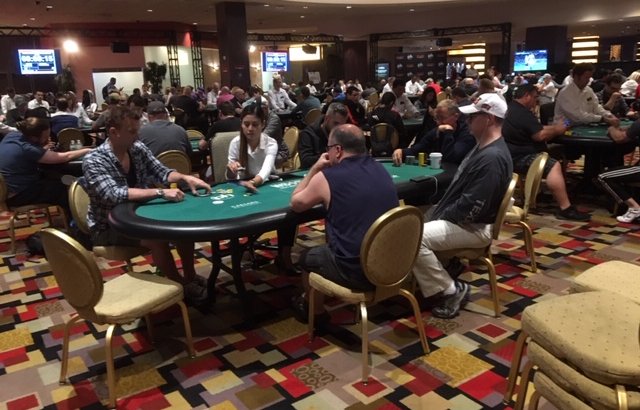 A few months ago, Heather and I debated the merits of playing in the World Series of Poker Tag Team event. We ended up deciding that the costs and risks didn’t make sense.  But as we were planning our Las Vegas trip and the poker tournaments we would consider, we stumbled upon a much less expensive tag team tournament at Planet Hollywood.

The significantly lower cost and “switch” element had Heather intrigued once more and me returning to a foetal position pleading “don’t make me!”.  Instead of playing one stack of chips and alternating players at will, the “switch” aspect means we each get a stack. When the tournament director announces “switch,” we trade seats and play the other’s existing stack. Basically this now doubles the chance that Heather will view me as a moron by tournament end.

So, of course, we’re signing up for this, because why not; except for all the reasons I listed in January. So the following is our live throwdown of this event.

Paul: I am very concerned that we will not be speaking to each other by this evening.

Paul: Even when playing my brilliant, sophisticated game, bad luck happens. AA gets cracked. Which by the way will be my story no matter how I bust out. I may pay off my table-mates to confirm this.

Heather: If anyone tells me that my husband lost my stack playing 7-10 suited, you’d better run for the hills. 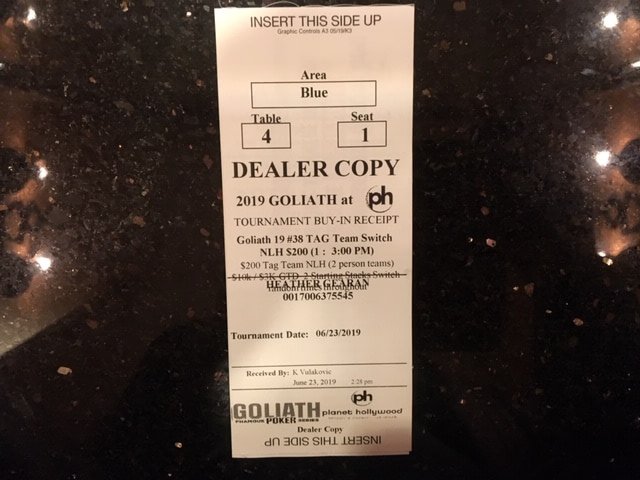 Heather: A switch in the first 30 seconds? Really? This could be challenging.

Paul: But you love uncertainty with schedule and expectations so much. We probably should have worked on relaxation techniques or got a Valium script before we left. At least we’ll get exercise. This does feel a bit like Musical Chairs.

Heather: And of course, I run into quad aces five hands in. I won’t be able to face myself if I blow off Paul’s stack in the first blind level.

Paul: Yeah, hey, my stack is much lower than when I left it! The “I ran into quads” was going to be my line, by the way.

Heather: What the hell? They call a switch and you are in a pot with 6-9 of diamonds! You promised you were not going to play those hands today!

Paul: Yeah, I was not loving that switch call. I have a rationale given the players in the pot and my position on the button, but I fear expressing it would move you to have me declared incompetent. Can they enforce hospitalization for being a danger to your poker self? Or a danger to yourself because your tag team spouse partner may kill you?

Heather: You always have a reason. What was I thinking, linking my poker fate to yours? I should have listened to your sage advice and avoided this tag team thing altogether!

Paul: I understand my poker wisdom eludes you, but patience Grasshopper, all will become known if you open your heart to my style.

Heather: Oh my god. If those women don’t stop yelling “Fireball!” I’m going to scream.  I’ve never seen so many falling down drunk people in a tournament in my life. And some of them are re-buying!

Paul: More potential profit for us! I just got moved to the table of the Fireball ringleader. She had everyone at the table distracted. After watching this for a bit, I decided I would raise any decent hand I had from any position because no one was paying attention. I won 4 straight hands that way. The Fireball Maven turned to me and said “I think I need lessons from you.”  I chuckled and restrained myself from saying “Lesson 1: Don’t drink 14 shots during an afternoon poker tournament.”

Heather: I have to say, I respect your moxie. Good read of the situation.

Paul: “Respect your moxie.” Now I can die happy. And I think we just found an epitaph for my urn.

Heather: Ok, I admit it. I’m the one who blew off the first stack. To be fair, I shoved with AJ suited, and got called by Q9 off. Then the woman proceeded to get a boat! This game is truly unbelievable sometimes.

Paul: You got in good that’s all you can do. No partner shaming will be doled out on that one. We still have my stack. And don’t forget to tell the readers that I actually have done a fine job building both our stacks. And you have protected them well.

Heather: You have done a fine job building both stacks. Except for that whole 6-9 suited thing.

Paul: Of course, that’s just the one you saw at the switch. My moxie isn’t so solid for me to admit to any other hands you may not approve of. 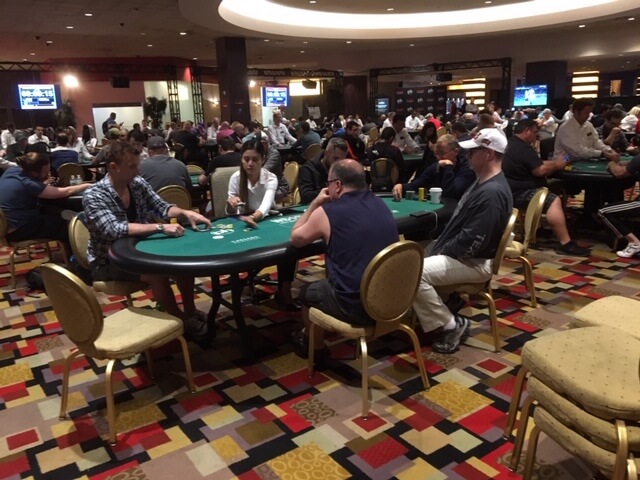 Heather: Damn, damn, damn, damn. How is it that both our stacks get lost under my supervision? I mean, how is that even possible?!

Paul: I will resist the urge to needle or gloat…although what’s the point of this Throwdown without that? Truthfully, you did nothing wrong, you were ahead both times and got unlucky.

I must admit, that was kind of fun – despite the word “Fireball” still ringing in my head. Our marriage appears to have emerged unscathed.

Heather: Absolutely. I think we have to play this again next year. Although, before then I am buying noise-cancelling headphones.

Paul: I’m in. This was fun, and only minor recriminations of my poker ability were levied. I can live with that.