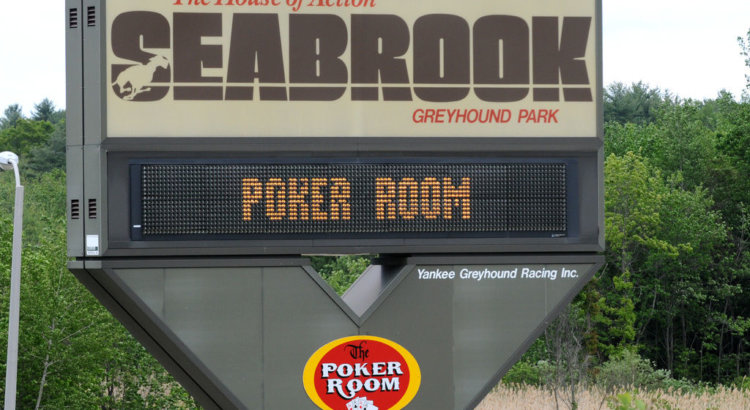 * NOTE: Seabrook poker room has been sold and is under new management. Please see our updated review of the GreyHound Casino and Tavern at Seabrook Park *

New Hampshire, for such a small state, boasts a remarkable number of bustling poker rooms. While it does not have a single large casino, there are multiple vibrant charity card rooms. Poker is the primary focus of these rooms, although each has a few table games as well. Even more striking: two of the largest poker rooms in New Hampshire are a mere two miles from one another! I have reviewed the Hampton Falls room already, now I’ll take on its bookend, the Seabrook Poker Room.

Seabrook poker room was our go-to poker room for about 3 years. Mostly because it has a weekend tournament that fit our schedule and budget. The $50 tournament starts at 4pm on Saturdays and Sundays. For such a cheap buy-in, 20 minute blinds with a starting stack of 15,000 chips is a bargain. Or, at least it seemed so. The 4:00 tournaments generally last about 6 hours, although they devolve quickly at the end to shove fests resulting in multi-way chops. But what could you expect for $50?! 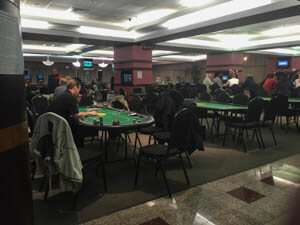 Seabrook hosts more tournament than cash action. A couple of cash tables are usually going in the late afternoon and evening on weekends. However, the cash game volume pales in comparison to Chasers and Hampton Falls just up the road every day of the week. As I write this on a Tuesday evening, there is 1 table running at Seabrook with no waiting list while Hampton Falls has 5 tables and waiting lists for both $1/$2 NL and $2/$4 limit games.

There are a number of excellent floors and dealers at Seabrook. Although there were a few weak spots, personnel were generally friendly and skilled and created a laid back environment. A wide range of personalities play at Seabrook, and the staff there made all feel welcome. Another plus is that the food is remarkably good. Nothing fancy, but Seabrook offers really good pizza and chicken quesadillas, and a number of other solid options.

The Times, They Are a-Changin’

In addition to poker and table games, Seabook hosts simulcast racing. Go there on a Triple Crown event afternoon, and you’ll wade through hundreds of eager folks playing the ponies. Rockingham Park in Salem, which also hosted poker and simulcast racing, closed in 2016. Seabrook then became the only option for those who want to bet the ponies or dogs in the state.

The poker players from Rockingham also needed to find new a new home. Salem is about half an hour from  card rooms in Nashua, Manchester, and Hampton Falls/Seabrook. Nashua had recently added the Boston Billiards Club and Casino cardroom into an existing pool hall and The River poker room moved to Nashua. Players from Rockingham gravitated towarad rooms based on convenience or the type of atmosphere and play they preferred. 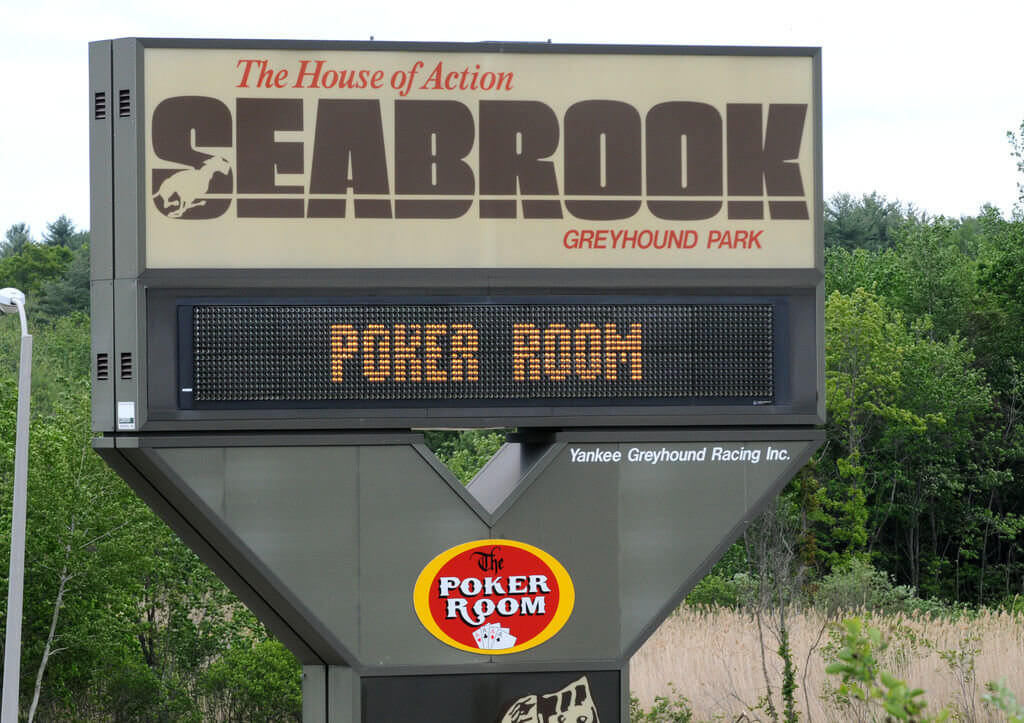 Seabrook always had quirks. During a heavy rain, trash cans caught water that would drip through the porous roof, although the cardroom proper stayed dry. Suffice it to say, a stroll around the facility with stained and missing ceiling tiles and a trash can obstacle course was not scenic.  But for a time, that seemed part of the rugged charm of the site.

Seabrook also has one of the widest ranges of poker player quality I have seen. There are a few good skilled players, a fair number of rocks who would never bet unless they had a monster, and a wealth of bad players. The bad players range from loose aggressive maniacs to loose passive players who see gold in every gut shot draw. For a time the balance was good, with plenty of players to take advantage of, but enough stability to feel you weren’t just playing bingo.

However, Rockingham’s closure fed many more wild players into Seabrook. In fact, some of the new players put the old maniacs to shame. Suddenly at the 50/100 blind level players would open for 3,000…blind…UTG. This had the dual effect of goading the existing maniacs to greater heights and pissing off the rocks and solid players. Tournaments became free-for-alls. Seabrook always hosted a set of cranky older players and a few explosive young men. With this new dynamic, it felt like Seabrook needed more security guards at the ready. Although we don’t play a lot of cash, those games seemed to follow suit and became crazy, loose games of raw machismo.

Competition from other sites continues to burgeon. In Salem, a new room, Chasers, opened in late 2017, filling the cash play vacuum left by Rockingham. Of course, there are only so many experienced dealers and floors to go around. All of these rooms have drained some of the best talent from Seabrook. During our waning days as regulars, the ratio of poor to good dealers just got too high. There were too many slow and mistake-filled blind levels. Pair that with conflicts between the old and new guard of players, and it just become unpleasant. A shame, as we still have an affection for the place and some of the people.

Seabrook is a small charity poker room in New Hampshire with some solid tournament options, but little cash action. The facility is aging rapidly and the players tend toward the wild. However, the food is excellent and the dealers are generally friendly and welcoming.