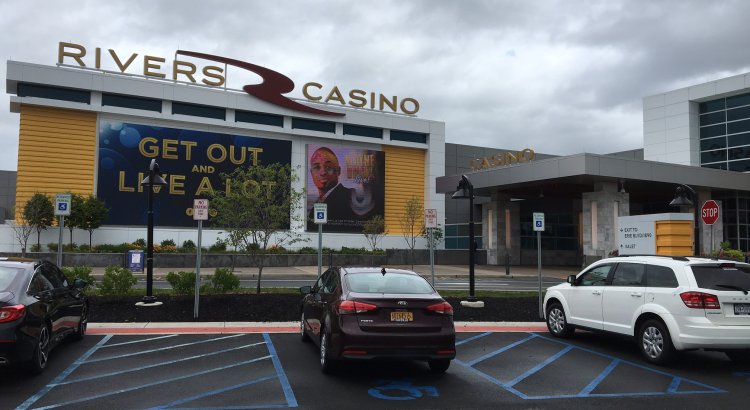 The Rivers Casino and Resort sits, appropriately enough, on the banks of the Mohawk River in Schenectady New York.  The Rivers is a rarity among casinos, one that did not allow dreams to overwhelm practicality. It is a small casino encompassing all of the key features of a bigger casino: a hotel, several decent dining options, and all the slots, table games, and poker options that one could want. It is also a relative newcomer to the scene, opening in early 2017. We found The Rivers Casino Poker Room to be an excellent addition to the poker options in the Northeast.

On this trip, we stayed a couple of nights in Schenectady at a hotel about a mile from the casino. We did not spend much time exploring Schenectady, but enjoyed a nice lunch at a small restaurant called Bel Cibo. There were a lot of closed storefronts downtown and many buildings in need of significant renovation, but there were signs, including The Rivers, that Schenectady is a city making efforts to return from tough economic times.

The Rivers is a full-service casino and has all of the typical gaming options available in most casinos. There are also  a couple of off-track-betting kiosks in the large bar/music venue area. The gaming area is one single large square room. It is  about the easiest casino we have ever had the pleasure to navigate.

A group of six restaurants ring the gaming area, include a steak house, burger place, Asian, and Italian pastry/dessert spot. Heather had a $4 chocolate shake at Flipt, the burger place. It was a darn good shake, especially at that price. I had an excellent cold roast beef sandwich at Johnny’s To-Go. Johnny’s offered an array of good looking, inexpensive quick options: pizza, pasta, salads, sandwiches, and soups. Prices were very reasonable.

But what sets the Rivers Casino apart from all other casinos we have thus far been to: it is completely smoke free. Yes, you are not allowed to smoke anywhere inside this casino. For those of us hardcore non-smokers this is a godsend. Most poker rooms within casinos are non-smoking, and most casinos have some non-smoking gaming areas. But the entire casino? Unheard of. The Rivers accommodates smokers with a nice tented riverside patio, complete with couches, tables, and ashtrays. I am not sure how this is handled in the winter, but nevertheless the interior air quality is a welcome break from other casinos. 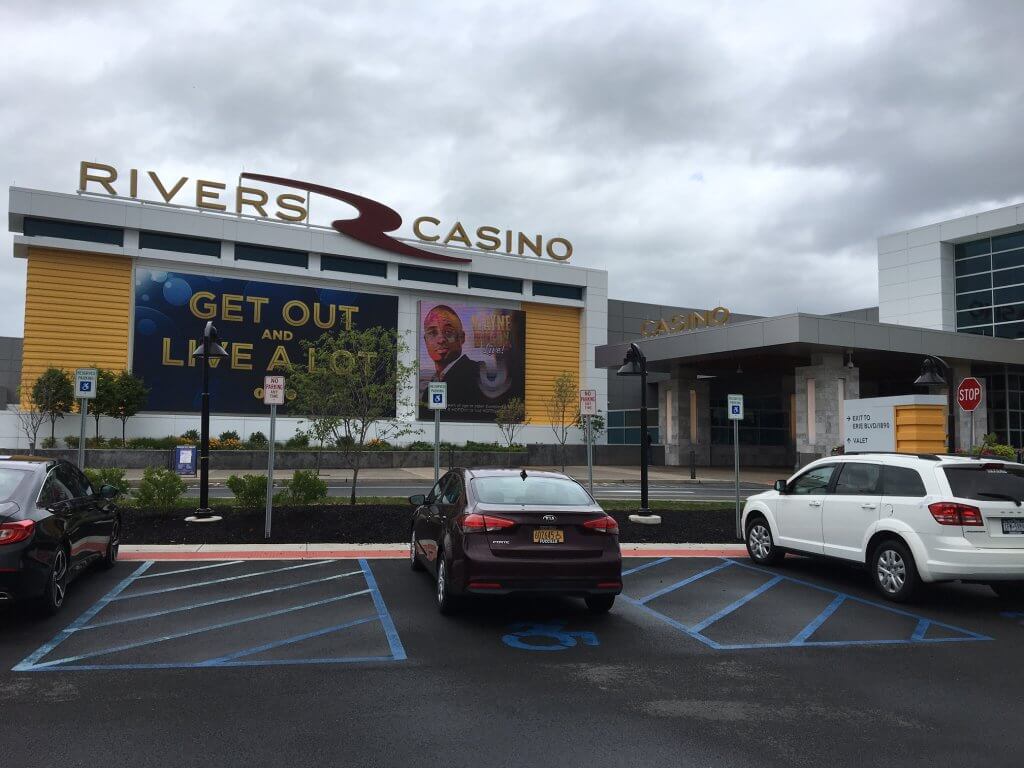 Although we did not stay at the attached Landing Hotel, it had a very modern look. Many rooms clearly have a nice view of the Mohawk River. The Rivers also holds an event center that hosts music concerts, comedy shows, and other events.

The Rivers Casino poker room is separated from the main gaming area by a wall and glass doors. The interior is attractive, has a new and fresh feel, and sports nice high ceilings.

When we initially started to play, the room was very warm and muggy. It seemed like the air conditioning had yet to kick in. A number of players complained and within an hour things started to cool down.

The tables themselves were big and well maintained with new felts, although a couple could have used a brushing off. Chairs were well-padded and comfortable. The lighting, however, was poor. Despite the overall bright feel of the sunny casino, the poker room felt dark and the flop was hard to see from the end seats. The chips were a bit dirty and there was a black tournament chip ($100) and dark purple ($500) one that were very difficult to tell apart.

The dealers at the Rivers Casino poker room were generally very good. There was one dealer who struggled with reading the board, but he was an exception to the overall high quality of dealing. Dealers also used automated shufflers during the tournament, so things moved quickly. The floors were on top of things. We were initially put at the same table, and the floor made an immediate adjustment at our request. When tables became unbalanced the  floors quickly moved a player. In general, the poker room has a solid group of dealers and floors.

One downside of the poker room was that there seemed to be only a single waitress rotating through the room. She didn’t make it by Heather’s table at any point in the first four hours of the tournament.

The Rivers Casino poker room, set in a fully non-smoking casino, is a small hidden gem in the Northeast poker scene.Click To Tweet

Players were fairly solid and aggressive. There were a few wild players calling everything, but these players were the exception. Most  seemed to be regulars who knew one another. They were fairly polite and somewhat social, but clearly serious about their play.

Cash is clearly the priority at The Rivers, particularly on Fridays and Saturdays when there are no standing weekly tournaments. On the Sunday that we were there about 10 cash tables were consistently active with mostly 1-2 NLH games and a couple of 2-5 NLH games.  There was a 3-6 limit game on the board as well.

Sundays through Thursdays The Rivers offers 1 to 2 daily tournaments.  Looking at their current monthly calendar, they also regularly sprinkle in bigger deepstack events. In July for example, they end the month with a $600 buy-in $200K guarantee tournament.

The standing tournament that we played had a decent structure: $125 entry, 20,000 starting stack, 25 minute blinds, with a pretty gradual blind increase. The game had some interesting blind increases: wedging a 200-300 level in between the 100-200 and 200-400 levels, for example. The Rivers Casino poker room is on the cutting edge, offering the increasingly popular big blind ante. One less common tournament feature was that the big blind ante kicked in right away at the 100-100 level.

The tournament that we played was also a “Survivor” tournament. All of the final 10% of players got paid $1,000. This structure plays to the strength of players who are better at tournament survival than building huge stacks. Heather was able to milk a small stack all the way to the money, taking advantage of other players who did not adjust their strategies correctly for this type of tournament.

The Rivers Casino poker room turned out to be an unexpected gem. Before our visit, we were unaware of its existence. We fit our visit in around a trip to see a show at the Williamstown Theater Festival and a visit to Turning Stone casino. We are very glad we did. The casino was small, but had good dining options and was fully non-smoking throughout all interior spaces. The tournament that we played had a nice structure, employed the big blind ante, and was well-run. The players are generally strong and personable, and are clearly there to play some quality poker. If you are in upstate New York, definitely drop by The Rivers for some cash play or to enter a tournament (although not on a Friday or Saturday).

The Rivers Casino on the banks of the Mohawk River in Schenectady New York is a small gem of a casino and poker room. The modest sized, but full-service, casino is fully non-smoking in all interior spaces. The limited set of food options nevertheless offers decent quality and value. The Rivers Casino poker room is dark, but offers large tables and comfortable chairs. The poker staff is solid and the tournament that we entered was well-run with a nice structure. Cash seems to be the greater priority of the room, as there are no tournaments on Fridays and Saturdays.