The River Casino & Sports Bar in downtown Nashua, NH adds a quirky, unique character to the New Hampshire poker scene. This is forged by The River’s location and setting, but also by the competition. The River Casino moved a few years ago from Milford, NH to the more populated Nashua. At that time, it entered immediate competition with the newly opened, and more upscale, Boston Billiard Club Casino.

Lacking the seacoast draw of some New Hampshire competitors (The Brook), the bucolic appeal of others (Lakes Region), or the closer to Boston Salem-based Chasers, The River has to leverage its strengths.  The feel of a small-city neighborhood bar pervades the River Casino with familiarity breading bonding among players.

A couple of blocks from Main Street Nashua, The River Casino is not much to look at from the outside.  The River Casino is housed in an old building attached to a carpet store.  It evokes an “I’m not sure about this” hesitation before you enter. All of that changes when you go inside. As you enter the building, you see a large beautiful bar with huge wall sized TVs. The room has a dark bar feel, but is very clean and attractive. The bar offers about 10-12 beers on tap including Bud, Guinness, Sam Adams, and a couple of decent IPAs.

Beyond the bar, there is a  two level gaming and poker area. On the bar level there are 6 black jack tables, 1 roulette wheel, and a craps table. This is also where the single-window cage is to buy poker chips or buy into a tournament. A slightly elevated area at the end of the building supports the poker tables.  For some reason, there is a non-functional small bar in the poker area.

The River provides a fairly standard menu of pub fare. We did not partake, and did not hear much talk from the couple of players who did, and so can not comment on the food quality.

If you make the trip to The River Casino, allow some time to explore Main Street in Nashua.  It is a mix of vacant store fronts and nice, even high-end (like the furniture store Pompanoosuc Mills), shops. Most appealing are variety of good-looking restaurants which a range of food types and price points. After one of our tournaments, we took in MT’s Local Kitchen & Wine Bar, which was great. 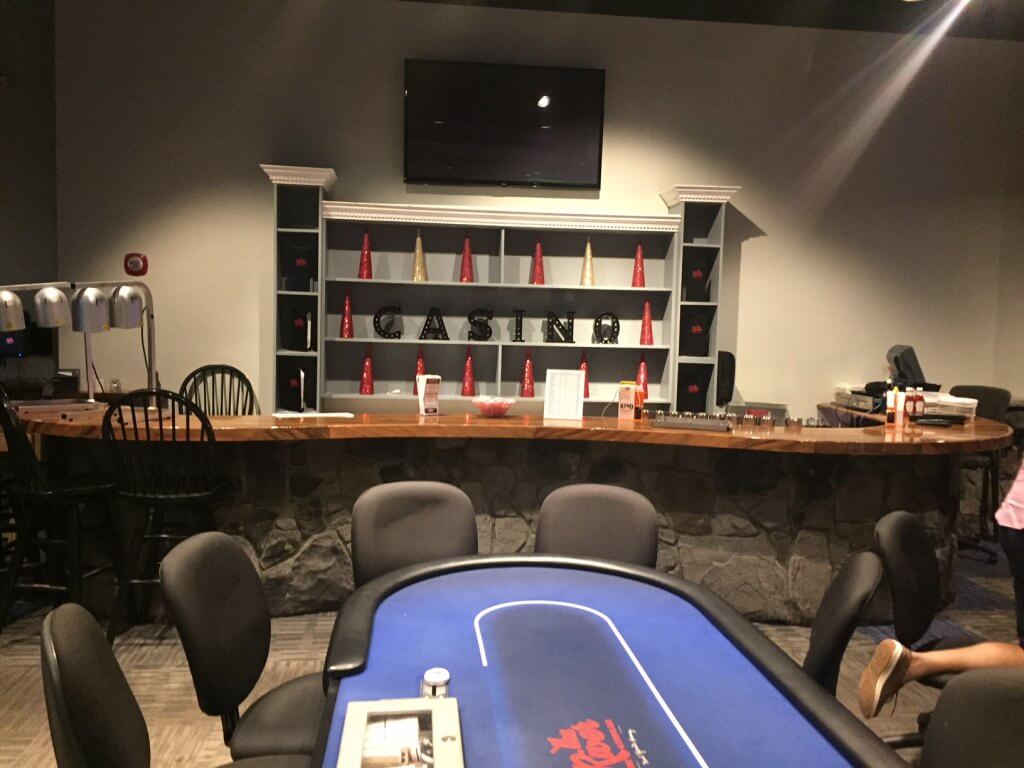 The River Casino is generally cool and pleasant, despite midsummer warm days. For being housed in an old building, it has good air circulation and no mustiness. Walking between the tables is challenging as space is tight.  The seats are well padded, adjustable and fairly comfortable.  The felts are worn, and the chips are badly in need of being cleaned. Wifi is easy to access and consistent.

It is tough to sum up the dealer quality at the River, as it is so variable. Some dealers are quite strong. A few have shaky moments.  A couple struggle to make change and pay off all-ins. However, most dealers are solid and competent and a couple are excellent. The dealers’ personalities are highly variable: some gregarious and others prickly.

One negative side effect of having a room of regulars with a casual neighborhood bar feel is that familiarity can breed contempt. One dealer talked at length with a player about how much a woman playing at another table irritated her with her constant complaints. While potentially a valid observation, the commentary veered into the unprofessional.

The River Casino is clearly not for everyone. But, if you're looking to play in a local tavern environment, with a quirky array of players, this is your place.Click To Tweet

Players at the The River Casino Poker Room

The player type and quality at the River varied as much as the dealer quality. Player ages ranged from 20 to near 90. Playing styles crossed age barriers. There were many rocks, both young and old, only playing top hands in position.  There were many others splashing aggressively in half the pots. When I 3-bet my first hand, I was called by 4 other players on an 8-handed table. That kind of play continued throughout.

The tournament structure we played (no longer active) fueled some of this dichotomy, calling for rather extreme playing styles. However, with some exceptions, hands were generally not executed with a high level of skill.

Players were mostly friendly and respectful of one another, although there are clearly some rivalries and old wounds at the table. One regular tended to get on a lot of players nerves both times we played. By the rather aggressive reaction around the table, this is clearly an ongoing issue.

On a positive note, there were a fair number of women playing at the River, with women representing about 30% of the tournament pool (and 3 of the 4 final players in the tournament). 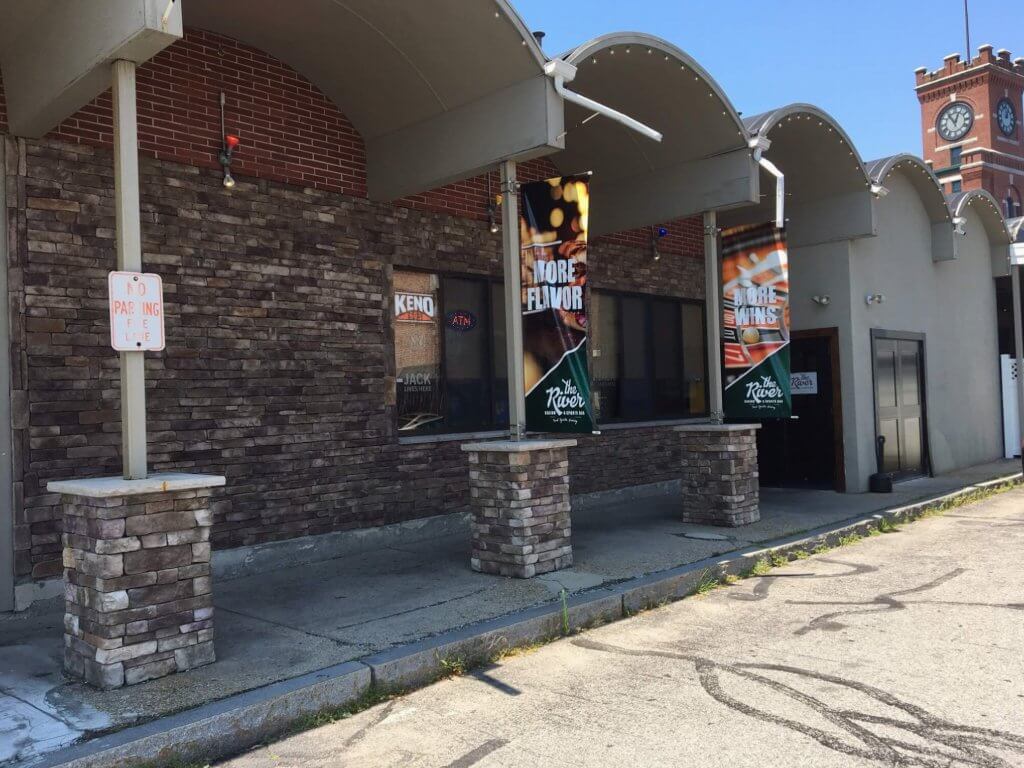 ** Note: The River Nashua is not currently holding poker tournaments.

The tournament we played in is The River Casino’s most popular: the Sunday $5 Fin. It is also one of the only tournaments held there, and is currently the only standing weekly tournament. No other special tournaments are even listed on the current month’s calendar (September 2018).

The Fin has an odd structure. You can buy in for just $5 (thus The Fin) and get 2,000 chips. But an additional $50 gets you 20,000 more chips. If you bust in the first hour, you can also rebuy for $20 and get 5,000 chips. At the first break, you can add-on another 15,000 chips for $50. So a lot of moving pieces and different configurations to accommodate the different styles of play noted above. Most players laid down $55 to start with 22,000 chips. But there were a few starting with $5 and hoping for a miracle or to exercise their $20 rebuy option. About half of the players added-on at break.

On the surface, the Fin is the kind of tournament we generally dislike with its short levels (15 minutes) and diverse structure. Players were busting and rebuying quickly, some in the first 20 minutes. The fields were small, about 30-40 players both times we played. But it actually did not play as quickly as it sounds. The full tournament took about 5 hours to play out, and there was some wiggle room for more than shove or fold decisions fairly deep into the tournament.

Other Tournament and Cash Play Factors

The different buy-in levels of this tournament provide a nice opportunity for players who have very different price points. There is a democratic feel to this peculiar structure. If you have $5, you can play and hope for the best. If you want to lay down $105 (for full buy-in and add on), have at it.  Anything goes, including playing wild in the first hour and rebuying to your hearts delight.

The River Casino is pretty low tech. When you register, you are given a laminated, cardboard seat card, not a printed out seat assignment. The tournament clock did not track player entries or current players. This made it difficult to determine when tables were about to break.  The payouts eventually were written on a chalkboard (when all the various rebuy and add on options closed and the money totalled).

The River is a largely cash poker venue, and has many daily promotional giveaways for cash play. They also offer Happy Hour for food and drinks most days of the week.

Overall Assessment of the The River Casino Poker Room

The River Casino is clearly is not for everyone. If you’re looking for a large, sleek modern room – this will not be your cup of tea. But, if you’re looking to play in a local tavern environment, with a quirky array of players, this is your place.  The River Casino also provides a nice alternative to other larger, and perhaps more intimidating, card rooms.

The River Casino is clearly is not for everyone. If you’re looking for a large, sleek modern room – this will not be your cup of tea. But, if you’re looking to play in a local tavern environment, with a quirky array of players, this is your place.