The Resorts World Catskills Poker Room is a moderate-sized full-service casino in the beautiful hills of Monticello, NY.  The poker room boasts a healthy 19 tables, and for those who want to stay overnight, the casino offers an adjacent hotel.

The Resorts World Catskills poker room can be found just off the intersection of NY-17 and 42 in New York about 15 miles from the Pennsylvania border. The drive to and the area surrounding Resorts World Catskills is breathtaking.  The gaming floor featured a sea of slot machines studded by a few gaming tables. In the back, you will find a Sportsbook, and sports betting machines. The casino also featured a Baccarat club room and an enormous Pai Gao room that was very active. The Thursday evening we were there, the craps and roulette tables were also hopping.

Although there were several restaurants in the casino, many were closed semi-permanently. Nonetheless, there were still a few decent options during the early evening. Sadly, these waned as it got later on in the evening. After playing poker, we sat at the bar at the Cellaio steakhouse and ordered a local IPA, which was quite good, and the focaccia appetizer. Our bartender could not have been nicer and more accommodating, particularly when we suddenly realized it was a few minutes past 10 and they had just closed.

We stayed in the Resorts World hotel for the evening, and the view over the wooded hills was very beautiful and serene.  The setting was reminiscent, although much smaller, of Foxwoods in Connecticut or Turning Stone in northern New York. 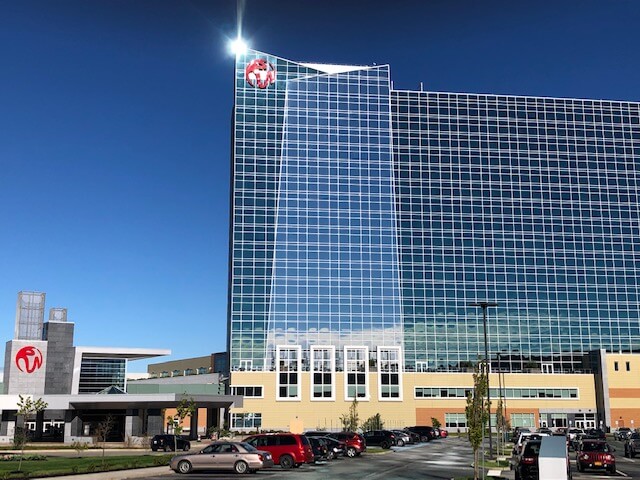 At Resorts World, the poker room is separated from the rest of the casino, by an entire floor.  The 19 tables were large with nice felts, padded rails, built-in cup-holders, and USB ports.  The chips were clean and seemed fairly new. The cards were branded and a decent size. The wheeled, adjustable chairs were well padded but did not have arms. The ceilings in the room were high, allowing for decent airflow.  The room was not the most visually pleasing: faux chandeliers, gold wallpaper, and bronze relief ceiling tiles gave it a heavy and somewhat busy look against the purple and red carpeting. TVs line the room and sports were playing on each.

Tables were well-spaced with plenty of room to maneuver. Despite the appearance of the picture below, the room was a bit dim, and the lighting over the table did not fully compensate.

The floor was polite and found me a seat right away. The dealers at the Resorts World Catskills poker room were very skilled across the board, especially as they had to handle some cantankerous players (see below).  They dealt fast and accurately and were able to handle any complications that arose. While I saw wait staff once or twice,  a couple of players were complaining that they had been unable to put in a drink order.

The Resorts World Catskills cash game players were among the most “aggro” we’ve ever encountered, both in the style of play and temperament. At the $1/$2 table where I played, most raises were between $12-$15, and if there was a straddle, you can be sure the open would be over $20. Players tended to bet most streets and pot control was not a concept given much regard.

Players take their poker seriously here. A look around the room did not reveal a lot of smiling faces. The scan also identified exactly zero female faces at the tables. Heather doped this out, as well as the climate, immediately and said “why don’t you play and I’ll take some notes and walk around the place.” A good choice as it turned out.

On our Thursday night, there was a high percentage of regulars: most players clearly knew one another. While in some rooms such familiarity leads to friendly banter, the talk here was pointed and intended to antagonize. From the beginning, players were needling one another, at first with a thin veil of good-natured humor. But the atmosphere quickly got hostile. One player attempted a string all-in which was called back to his first bet. He lost his cool and said, “well the rest is my next bet!” Then, in the next hand, he blind bet the flop and had much to say about it. Finally, he huffily left the table for a break. The entire room seemed to be operating in this fashion.

The Resorts World Catskills poker room currently offers two weekly tournaments: Monday mornings at 11:15 am and Wednesday evenings at 6:15 pm. Both have the same structure: $130 buy-in (including the “optional” $5 dealer add-on) gets you a 25K starting stack, with 20-minute blinds, with a 20% rake. Not terrible certainly, but not the greatest value for $130 we’ve seen either.

The room seems to drop in other special events as well. A couple of days after we were there they held a $400 event with 30-minute blinds, of which $100 went to a black chip bounty.

The Resorts World Catskills poker room is set in a moderately sized casino in a beautiful rustic setting.  The room is professionally run with high dealer quality. Cash play is not for the wallflower, however. Players are aggressive in both their betting and their attitudes. This was one of the least pleasant rooms in terms of general surliness and contentious verbiage that we have experienced. If you like such exchanges, you can practice your verbal game here! However, it was a bit over-the-top for our tastes.

The Resorts World Catskills poker room is set in a moderately sized casino in a beautiful rustic setting.  The room is professionally run with high dealer quality. Players are aggressive in both their betting and their attitudes.