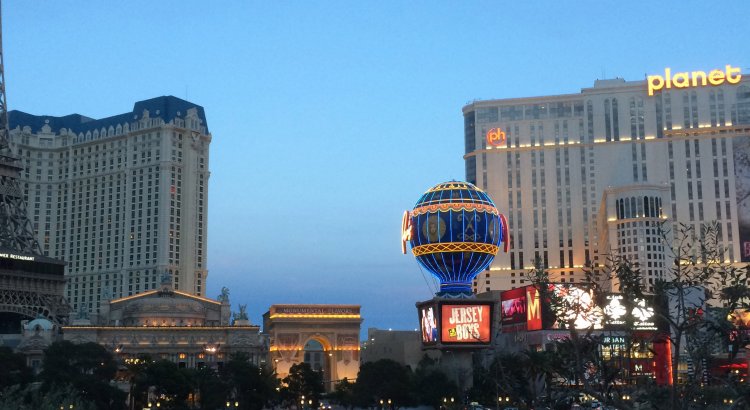 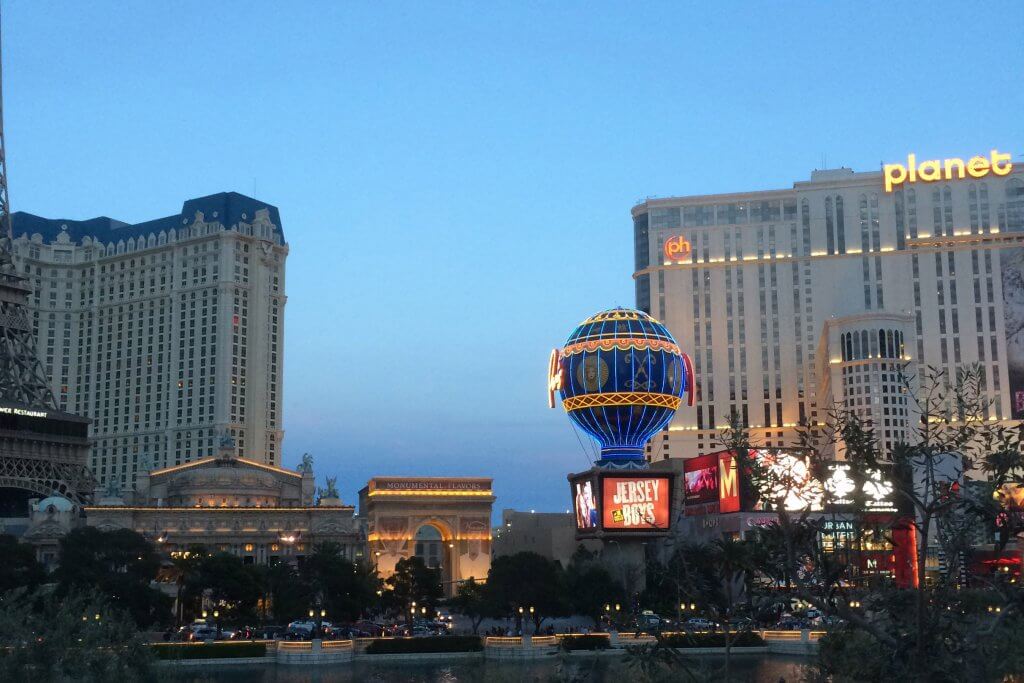 Planet Hollywood is full service Las Vegas casino. It features a hotel, a complete array of slots and table games, as well as a race and sports book.  The casino also boasts many conference rooms. Reality TV show auditions were even taking place while we were there.

The Spice Market buffet, one floor below the main casino offers a nice variety of options (Mexican, Middle Eastern, seafood, and more). Other dining options include a Strip House Steakhouse and Koi, a Japanese restaurant. There are close to a dozen other casual and fast food options in the casino proper that encompass your typical casino fare. These include a burger joint, pizza, sandwiches, Starbucks, Mexican, and Chinese. Addtionally, there are a wide variety of options in the attached Miracle Mile Mall.

The Miracle Mile Mall offers over 200 retail options adjacent to the casino. Finally, if an impulsive mood strikes any unmarried couples out there, there a wedding chapel awaits.

The gaming floor itself was visually overwhelming. The aisles around and through the casino wound around making it somewhat difficult to orient oneself. The Planet Hollywood casino is also quite loud.

If you like being surrounded by the noise of slot machines and the bustle of crowds, the Planet Hollywood poker room will be right up your alley.Click To Tweet

The ten table Planet Hollywood poker room is the least “room” we have seen. The poker room comprises a rather amorphous area plopped down amid slot machines in the casino’s main gaming area. There is no entrance to the poker area, no notable signage, and really no separate identity. As the “room” is part of the casino floor, is both smoky and loud. It also felt surprisingly dark. The space the poker room has been allotted covers a very small footprint, so the ten tables are packed pretty tightly.

Nonetheless, the felts were clean, cushioned, and featured an attractive design. The adjustable chairs were well padded and on wheels. The chips were clean, if a bit worn. There were TVs on posts ringing the area.

The tournament we played was held upstairs outside the poker room. So we don’t have a good idea how it would feel to play an extended time in this area. However, the environment seemed unfriendly to the poker player who’s not a fan of the general casino atmosphere. 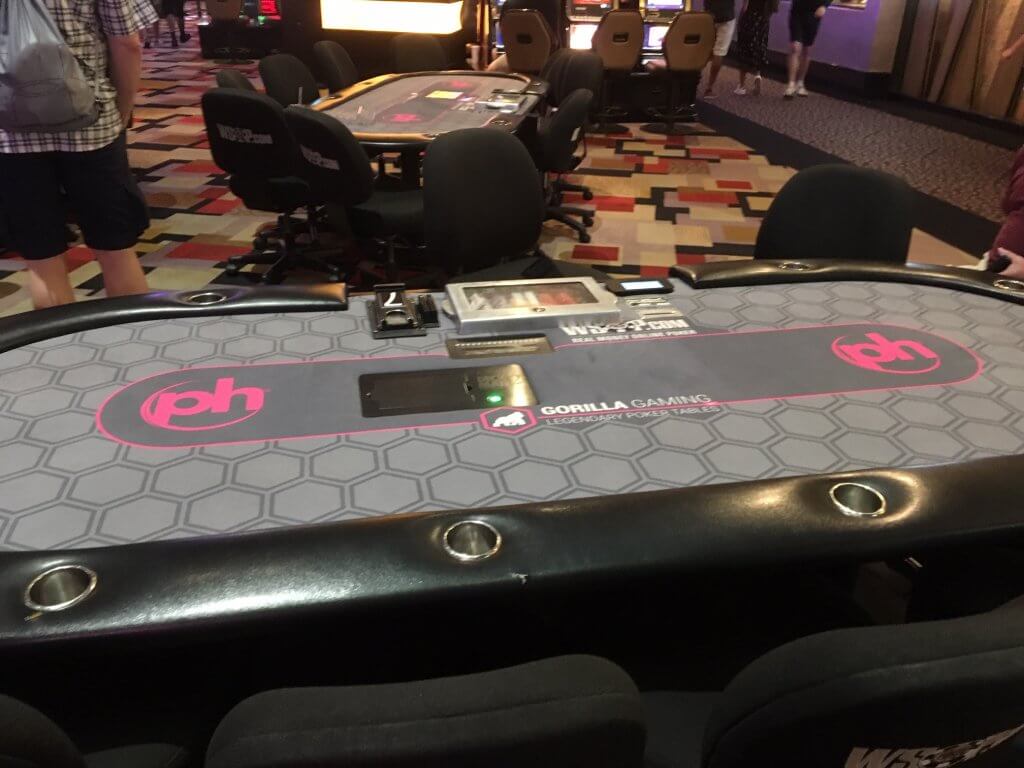 In the very enjoyable Goliath event that we played, the dealers were highly variable. Some were very skilled and fast. Others struggled mightily to deal at a reasonable pace and correctly award pots. Given this event was held during the World Series of Poker, which requires an enormous number of dealers for not only WSOP events, but to fill other casino tournament series as well, it was a bit hard to determine how many of these were full-time Planet Hollywood dealers.

The floors generally ran the wild tag team switch tournament well, and with the level of seriousness it merited (low). One floor was a bit confused about the seating rules for players joining late after the first hand switch, but no one could blame her. Chaos reigned. 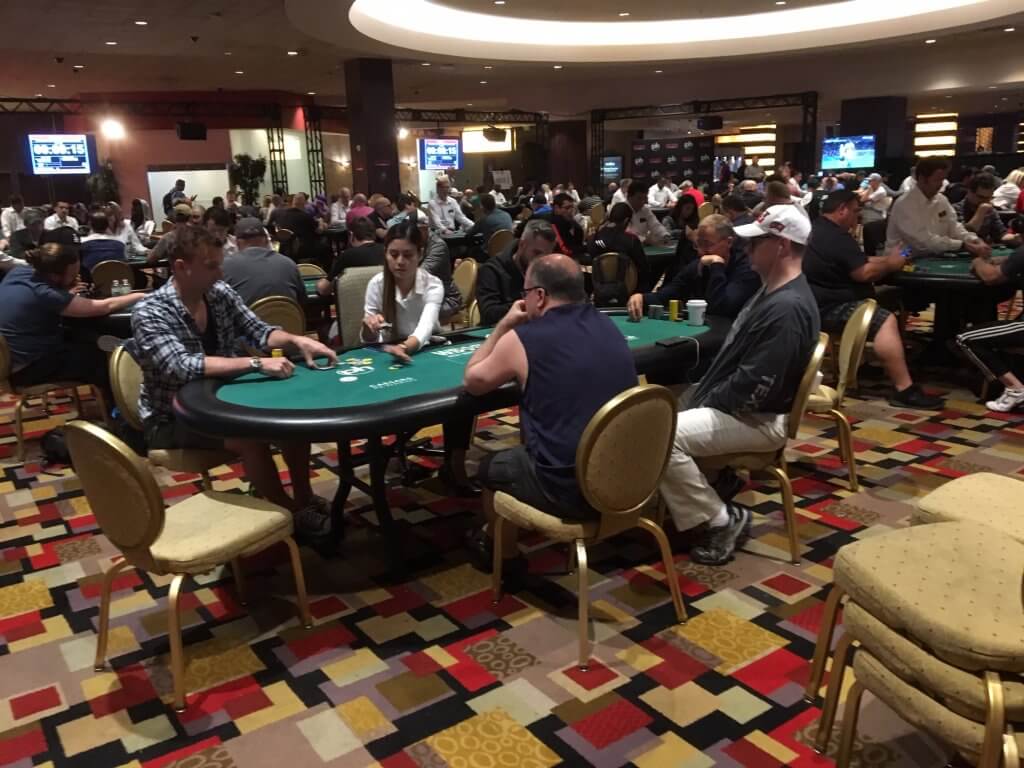 We’ll need to give this an incomplete grade, as most of the tournament players were clearly in town as part of the wider WSOP frenzy.  This was in no way the Planet Hollywood’s typical player population.

The Planet Hollywood poker room offers a single standard tournament that they run four to five times per day. The buy-in is $80, with a starting stack of 15K chips and 20 minute blind levels. The rake of $22 (28%) is fairly substantial. On Sunday mornings, the tournament increases to a $135 buy-in (rake drops to 24%) with a $5 staff bonus add-on for an additional $5K in chips.  Blind levels remain at 20 minutes until level 9 when they increase to 25 minutes.

There were 5-6 active cash tables going on during our our Sunday afternoon tournament.