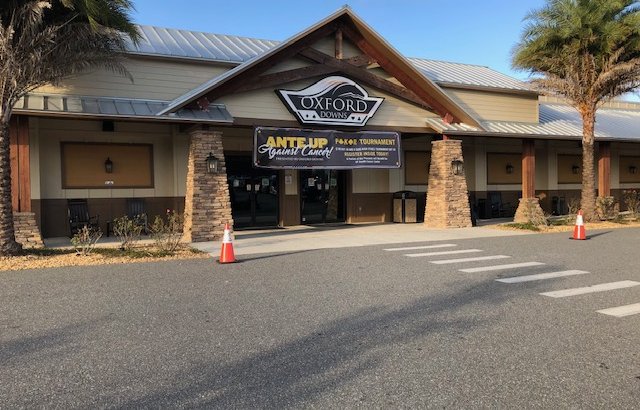 Tweet
Share
Share
Oxford Downs poker room sits in a fairly remote area of central Florida, away from immediate competitors. However, on our visit to the Tampa area, we decided to venture north following dual draws of meeting up with a poker-playing friend from Gainseville and a Saturday evening Crazy Pineapple tournament. We love ourselves some Crazy Pineapple!

Oxford Downs lies in Summerfield FL, about an hour and a half north of Tampa, an hour northwest of Orlando, and an hour south of Gainesville. It is at once not near much, but a relatively easy drive from several major Florida cities. The drive up from Tampa was mostly on Route 75, followed by some very rural roads complete with cow pastures. In general, the ride was easy and pleasant.

When you initially turn into the main entrance, you will think “I must have done something wrong.” Have faith and follow the road to the end and Oxford Downs will appear. While the card room consists of a modest-sized building, it fronts an attractive horse track that hosts infrequent special events. From what we understand, horse racing allows the room to exist, but unlike Tampa venues such as Silks, the track exists to check that box rather than be a revenue/entertainment stream.

Parking is free at Oxford Downs. Note that Oxford Downs is open nearly 24 hours (10am to 4am) Friday and Saturday, with slightly restricted hours Sunday through Thursday (10am to 2am). 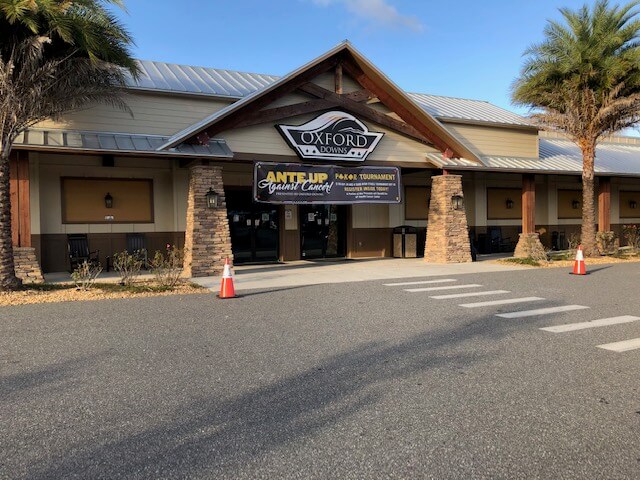 Oxford Downs has a bar/Tiki room restaurant attached to the back of the poker room facing the track. As we were there in February, it was fully enclosed by thick plastic “walls,” but it appears that it is open-air much of the year. The dining area is pretty humble with cheap tables and chairs strewn about in front of a small stage. We sat at the bar and had a local Florida IPA, which was very good, and a few appetizers, which were not. It was probably the worst food we’ve ever had at a poker room. The menu is mainly apps, sandwiches, salads, pizza, and breakfast items. We shared a few apps and, sadly, can recommend none of them.

A blues/Southern rock cover band played that evening in the bar, and was pretty decent. In better weather there is further seating outside the tiki bar/restaurant area and a small stage outside as well.  The tiki bar had a corn-hole game and several TVs spread around the room.

There is also a small bar in the cardroom. Oxford Downs, like all of the non-tribal card rooms in Florida, legally can not have traditional table games (e.g., blackjack, craps) and slots, so instead has a few tables of faux poker (e.g., three card poker, pai gow) gambling games. 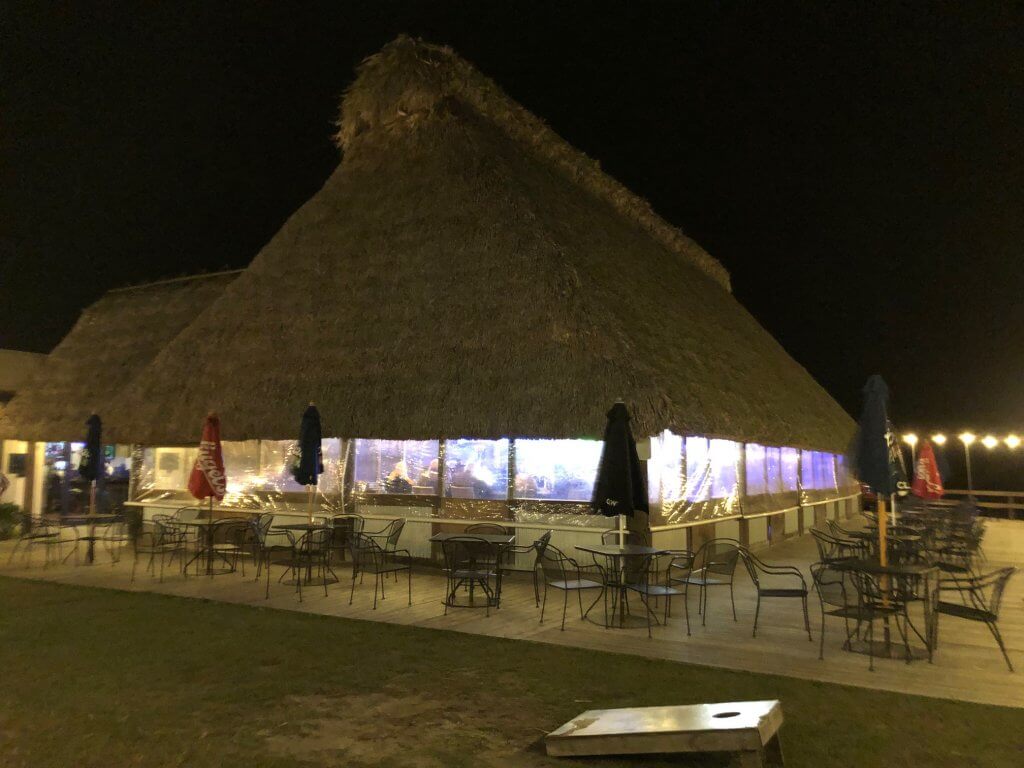 The 24 table Oxford Downs poker room consists of 17 actual poker tables when you exclude the poker table games. The poker area is a single room with the cage immediately to your right as you enter and the floor’s desk to left. The room is non-smoking, with high ceilings giving it an airy feel. Lighting in room, in general, is good. Music was playing through speakers when we were there, but at a moderate volume. Despite it being active Saturday night, the volume in the room was pleasant, indicating well-designed acoustics.  Small TVs ring the room, several showing tournament information.

The poker tables were fairly well-spaced with plenty of room to walk around. Our tournament played nine handed, so tables felt spacious.  There were chargers and drink cups at every seat, and autoshufflers in the tables. The chairs were well-padded, but had no rollers and were not adjustable. They felt a little low relative to the tables. The tables were not the cleanest, and the chips were quite dirty.

The Oxford Downs poker room proved to be solid if unspectacular. The room itself is reasonably comfortable and the personnel good.Click To Tweet

The Oxford Downs floors were friendly and attentive, running the tournament well. Dealers were also fast and friendly, and made few errors in the tricky Crazy Pineapple tournament. Even the best dealers forget the additional card and discard step in Crazy Pineapple from time to time. Cocktail staff circled frequently and no one seemed to lack a beverage.

One of the humorous oddities of Oxford Downs is that they require a player’s card to enter the tournament. However, they stated their card machine was “down,” so after we registered, the cage scrawled our numbers on blank pieces of white paper, and handed them to us. The friend we met had first played a tournament there about six months prior, and, when we told him our registration story, he reached into his pocket and produced his player’s card –  a small piece of paper with a handwritten number. So apparently the IT team has some catching up to do!

The players at Oxford Downs were older than the average poker room. Despite being an isolated venue that clearly attracts mostly local regulars, players were very friendly to newcomers. My table was fairly tight, which allowed me to be more aggressive than usual, while Heather’s was highly aggressive, forcing her to a more careful approach. Skill level overall was pretty standard for a small local cardroom like Oxford Downs.

Oxford Downs poker room drew us in with this standing Saturday night Crazy Pineapple game. The tournament ended up with 36 entries and it did not disappoint. It was a lot of fun. Oxford Downs offers two tournaments six days a week (with a single tournament on Monday). Most buy-ins are in the $50 to $75 range, with Friday nights featuring a $125 event. Some mid-week tournaments run as few as 20-30 players, but Thursdays through Saturday tournaments are more in the 50-60 player range.

When we entered at 5pm on Saturday, almost all available cash tables were full and the poker table games were hopping. By 9:30 when we left, there were only seven active cash tables. Bravo indicates that the Oxford Downs poker room runs two to three $1/$2 cash tables Sunday through Thursday evenings and six to seven $1/$2 tables on Friday and Saturday nights. On weekdays there is not much else, maybe an occasional $2/$5 or Omaha table, but these are rare.  Friday and Saturday nights however, you can count on a table or two of $2/$5 and occasionally an Omaha or a limit table.

The Oxford Downs poker room proved to be solid if unspectacular. The room itself is reasonably comfortable and the personnel good. While they could use some cleaning of both tables and chips, the rest of the room is in decent shape. However, because of the fairly remote location without other strong entertainment/dining options onsite, it’s not really a place worthy of a special one to two hour trip (unless you’re a fan of Crazy Pineapple!). So if you happen to be within an hour of Summerfield, certainly drop in, but we wouldn’t go out of our way to venture to Oxford Downs.