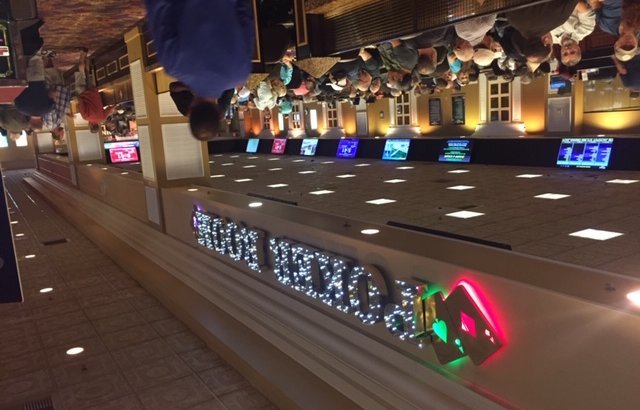 While most major Vegas casinos tightly hug the Strip, the Orleans Hotel and Casino is relatively isolated.  Positioned several blocks west of the south end of the strip, the Orleans must provide it all in order to draw players away from more central options. And it largely succeeds. Along with the standard gaming, hotel and upscale dining, The Orleans also houses a newly renovated multi-screen movie theater and a 70-lane bowling alley. In addition, it boasts a food court with staple chains such as Fuddruckers, Sbarro, Subway and Baskin-Robbins.   There’s even a sizable arcade for the kids.

The Orleans Casino is self-sufficient, and the Orleans poker room has a similar feel. The poker room is neither the largest or fanciest of Vegas rooms, but it gets the job done.

The food court is conveniently located near the poker room. There are plenty of dining options a bit farther afield, including the obligatory high-end steak house (Alder & Birch) and a good looking oyster bar.

There is a  sports book near the oyster bar, and a showroom which offers a variety of older acts. The Nitty Gritty Dirt Band and a Beatles tribute were on tap when we were there. As of this writing, the Orleans website offers REO Speedwagon and The Temptations (how old must they be!) on the docket. The attached Orleans Arena hosts basketball and hockey games, as well as other large events.

I was able to kill time waiting for my wife (who outlasted me in the tournament we played in the poker room) by playing penny video poker nearby. I played for well over an hour on less than five bucks. This is a big plus for those of us who hate to waste too much money gambling beyond poker. 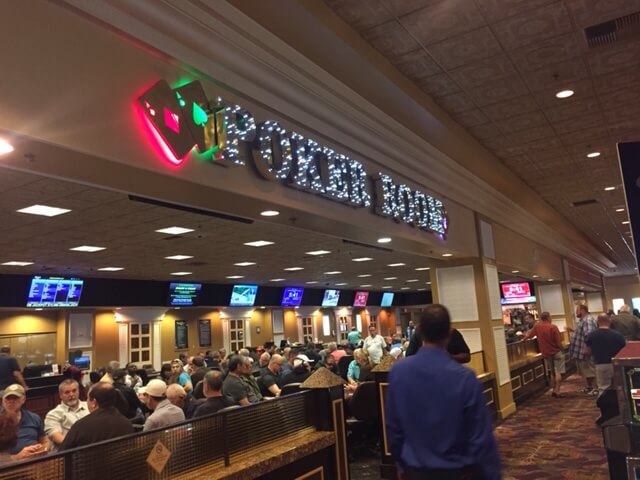 The poker room covers a long rectangular area and is open to the rest of the casino. Only a half-wall separates it from the nearby slots.  The Orleans is not smoke-free, so the poker room was unfortunately notably smokier than venues in which the poker room is walled off. The 35 tables were large, so players were not too tightly packed. They were also well spaced to give you room to maneuver between them.  The chairs were well-padded and extremely comfortable.

Video screens ring the area between ceiling and walls with a variety of sporting events being shown.

The dealers were, in general, very good. They were competitive in quality with other large Vegas venues. They made very few mistakes and were friendly without being distracted. Interestingly, there was no auto-shuffler, but that did not seem to slow things down much. The floors managed our tournament well, moving players and breaking tables as needed.

Wait staff circulated frequently and were prompt in responding to drink orders. 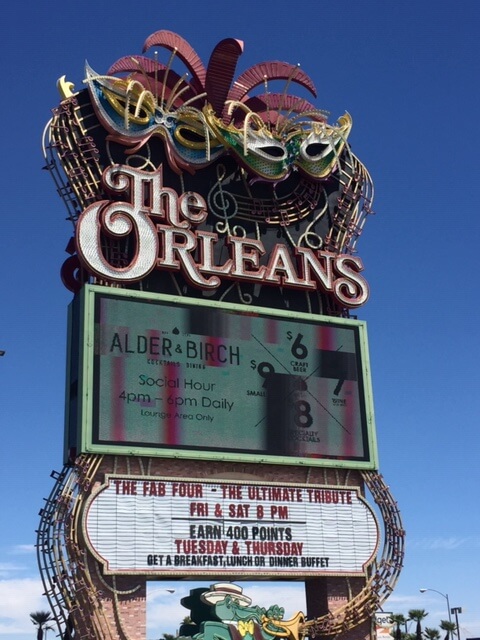 The players in the tournament that we played were solid for the most part. It was WSOP week in Las Vegas, so perhaps our experience was not fully representative. However, there were plenty of regulars in the tournament, as was made clear by the table discussion. Players represented the typical skill range and distribution that we’ve see at other Vegas venues like the Venetian,  There were one or two loose, crazy players and a calling station or two at each of our tables, but most played a tight aggressive game.

Players skewed a bit older at the Orleans, but there was certainly a decent age range represented, and a notable number of women (perhaps because the Women in Poker Hall of Fame induction had been held at the Orleans the same week we were there). We were also among several husband and wife couples playing in this tournament.

The Orleans poker room is a solid contributor to the Vegas scene.Click To Tweet

We played in a $130 entry bounty tournament ($25 bounties). The tournament offered only 15,000 chips, which is a bit lower than ideal, but varying 20 and 30 minute blinds helped the tournament play out at a reasonable pace. In reviewing the Orleans’ weekly tournaments, buy-ins range from $80 to $130 and include an interesting mix of games.  While most are Hold’Em, there were at least four Omaha tournaments and a couple of mixed game tournaments as well. This was about as wide a set of tournaments as we have seen offered at a full service casino.

The cash tables were quite busy while we were there.  There were a variety of limit and no-limit games active.  The Omaha games had a deep wait list. But again note that we were there during the WSOP, so your results may vary.

The Orleans poker room is a solid contributor to the Vegas scene. The Orleans complex provides a full self-contained experience, which is really necessary given its location off the strip. The poker room itself suffers a bit from being exposed to the smoky casino, but the tables and chairs are quite comfortable. The staff is very professional and the dealer skill level is high. There was decent player diversity, both in playing style and personal characteristics.

The Orleans poker room is a solid contributor to the Vegas scene. The Orleans complex provides a full self-contained experience, which is really necessary given its location off the strip. The Orleans poker room itself suffers a bit from being exposed to the smoky casino, but the tables and chairs are quite comfortable. The staff is very professional and the dealer skill level is high. There was decent player diversity, both in playing style and personal characteristics.