Skip to main content
Tweet
Share
Share
Note: One-Eyed Jacks has undergone a significant renovation since our visit. We will update this post as soon as we get back to Tampa.
The trip to One-Eyed Jacks poker room (housed in the Sarasota Kennel Club) took a bit of commitment on our Tampa trip. The room was about an hour outside the city, and like everything in Florida, getting there involved dodging aggressive drivers on the highway and impatiently sitting through traffic lights once off the highway. But that’s Florida. Nonetheless, the volume of cash games and diversity of tournaments intrigued us. So we took the second Saturday of our vacation to drive down to Sarasota for lunch, a beach view, and some poker.
NOTE: This visit to the One-Eyed Jacks poker room occurred at the end of February 2020. While now open again, the room has changed in the interim, for obvious reasons. Thus, your experience may vary.

One-Eyed Jacks is located about an hour south of Tampa, on the north side of Sarasota.  The room is right beside the Sarasota-Bradenton Airport.  It is accessible from major roads, but sits in a very congested area.

We drove down early from Tampa so we could check out the Sarasota beaches and grab a quick lunch. We ate lunch at The Dry Dock Grill in the Lido Beach area. The food was pretty good, and sitting outside on their patio was very pleasant. We walked along Lido Beach after lunch, which had some of the finest white sand we have ever seen.

If you visit Lido Beach, leave yourself plenty of time to get over to One-Eyed Jacks. Although only about 10 miles away, it took us over half an hour.  There was some construction that made parts challenging, but mostly, the Florida traffic and never ending traffic lights were our main nemeses once again.

Parking is free at One-Eyed Jacks.

One-Eyed Jacks poker room is housed on the site of the Sarasota Kennel Club, a now-defunct dog track. Florida outlawed dog racing starting in 2020, but the Sarasota site decided to close racing in 2019. Simulcast horse and dog racing remains in the main level of the building.  There is also a restaurant and cafe onsite. The poker room itself has a small bar in the corner. As this is not a Florida Native American casino, it is not allowed traditional table games. Instead the room offers a couple of the faux poker table games (as you enter on your left). 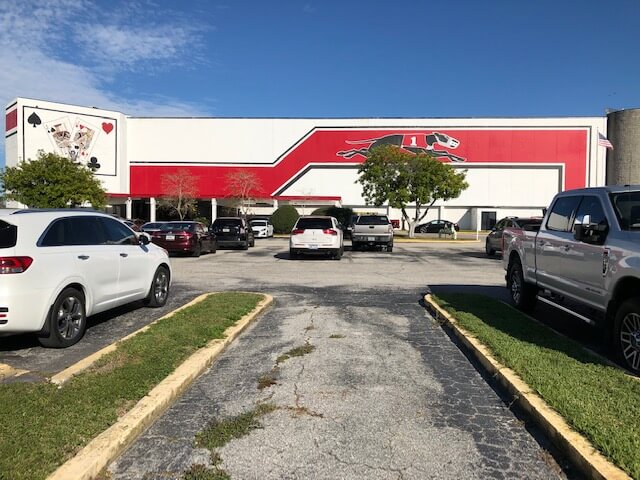 The 35 table One-Eyed Jacks poker room is on the second floor. The registration desk lies immediately as you enter and is where you sign in for tournaments.  Not sure where the 35 tables they claim are located. There seemed to be far fewer in the room, and we did not see where more might be. The room itself was fairly nondescript, definitely the least attractive of the Tampa are rooms we visited.  It appeared that this room’s better days were behind it. However, there was mention of a coming renovation later this year, so perhaps the look of the room will improve.

The lighting was pretty dim in the room in general, and it was hard to see cards across the table. There were three large TVs in the room showing sports, and a few smaller TVs with racing information. The chairs were fairly comfortable: padded, adjustable with wheels. However, they were a bit creaky and too upright.

Spacing between tables was sufficient, but not as spacious as some better-appointed rooms. We played 9-handed in the tournament, which helped with spacing at the good-sized tables. Rails were padded well, but lacked cup holders and USB ports. Felts were well-kept and very soft, and the chips were very clean. For some reason, the cards felt a bit small and insubstantial.

The One-Eyed Jacks dealers were solid and generally seemed knowledgeable and skilled. The floors did not seem to have a major presence, but did appear when called to solve a problem at a table. The wait staff appeared early in the tournament, and were very active and regular throughout.

The players at One-Eyed Jacks tended to be quiet but polite and friendly when spoken to. The player mix was fairly diverse in age, ethnicity, and gender. Early tournament activity was fairly aggressive for a low buy-in event. Most players entered pots with a raise and 3-bets were not unheard of.

On every poker trip, there is one venue that falls a bit short. For our Tampa visit, it was the One-Eyed Jacks poker room.Click To Tweet

One-Eyed Jacks poker room hosts a couple of tournaments each day. These tournaments have some of the widest range buy-ins that we have seen in daily events at medium sized-rooms. You can buy-in for as little as $45 for a 12K starting stack (plus the ever-present West Florida $10 dealer add-on for an additional 5K) with 20-minute blinds. Or you could find yourself in a $160 tournament with a 15K starting stack (but hey, the $10 DOA gets you 10K this time). There are even a few larger buy-in events of over $300. 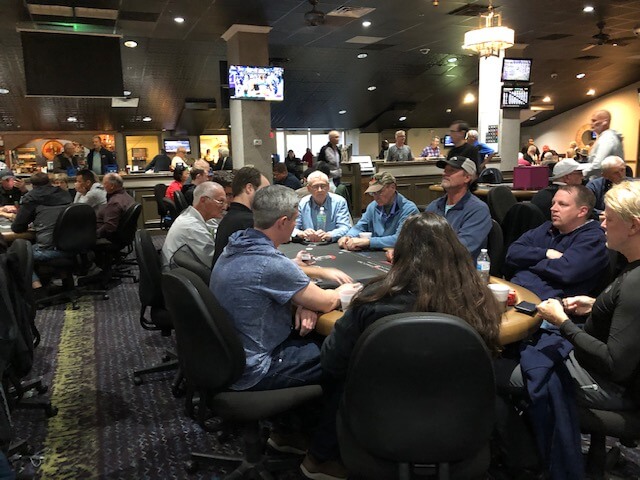 Tournament sizes vary quite a bit, with 30-50 players in most weeknight games (for both low and high buy-in events).  Their Wednesday evening $100 buy-in game was drawing fields in late 2019 and early 2020 of 140-160 players! Early afternoon games on the weekend are in between, with about 50-70 players.

Tables were 9-handed. The antes kicked in early. Because play was aggressive you could get short-stacked or large-stacked pretty quickly. Although the levels went up fairly gradually, shove-or-fold mode kicked in earlier than in similar tournaments we have played.

PokerAtlas reporting indicates that the One-Eyed Jacks poker room runs four to six $1-$2 cash tables on a weekday evenings and which expands to about 7-8 on Friday and Saturday nights. Sundays are slower with about 2 $1/$2 tables. On weeknights, there may be an occasional $1/$2 table, but not much else. For Friday night through Saturday night, you can get a $2/$5 table, maybe a PLO table and various other games (usually limit games). Things were very active on the Saturday afternoon we attended, with a total of 11-12 cash tables going.

On every poker trip, there is one venue that falls a bit short. For our Tampa visit, it was the One-Eyed Jacks poker room. Frankly, it’s hard to put a finger on exactly why. There was a lot of activity, but the room itself felt dark and drab, and the atmosphere followed suit. The comfort rating we give this room speaks more to those intangibles, because the typical elements – chairs, tables, spacing in the room – were fine.  Also, the personnel was good. Somehow, overall, the whole was weaker than the sum of its parts. If you are in the Sarasota area, sure, stop in to play some cash or one of the room’s many tournaments. However, if you’re in Tampa, I’d probably not bother to take the hour ride south to One-Eyed Jacks.

One Eyed Jacks had a lot of activity, but the room itself felt dark and drab, and the atmosphere followed suit. The comfort rating we give this room speaks more to those intangibles, because the typical elements – chairs, tables, spacing in the room – were fine.  Somehow, overall, the whole was weaker than the sum of its parts.