After hours of grinding through a 230 person tournament, you find yourself at the final table with a huge stack. Only five other players remain. One of the middle stacks says “anybody want to chop?” What do you do? Do you flatly refuse (and risk looking like a jerk)? Say “sure” and let the pot be evenly divided despite your 2 to 1 chip advantage on the second stack and two other players sucking oxygen? Or do you find a better way? How do you negotiate the best poker chop?

I recently found myself in exactly this enviable position at the Playground Poker Club outside of Montreal. The experience led Paul and me into our four thousandth discussion about chopping poker tournaments. While there’s no single right answer, we have some rules of thumb for negotiating the best poker chop in various situations.

Should You Agree to a Poker Chop?

What is your stack size?

The most obvious consideration when considering a poker chop is the size of your current stack. Are you the small stack at the table, barely staying ahead of the blinds? If so, take any chop offered that gets you near an equal share.

If, on the other hand, you’re the largest stack on the table, you may want to play on in search of bigger payouts. Even dropping one or two more players before a chop will increase your likely payout. But don’t forget, those blinds are going to keep going up, and bad things happen in poker to even the best of people.

What are the blinds relative to chip stacks?

You are rarely deep stacked at a final table, but tournaments do play down at wildly different rates. Some sort of chop is definitely in your best interest if most of the table is down to 5 big blinds or less, and even your “big stack” only adds up to 11 or 12 big blinds. Bingo poker is a very dangerous place to be. In the blink of an eye, the small and big stacks can swap places. Then you’ll be the one asking for that equal chop! If, on the other hand, the table averages around 20 big blinds and you’re still over 40, you may want to slow the chop talk down and see whether you can outlast the smallest of the stacks.

How good a player are you relative to the rest of the final table?

Are there other players at the table who appear to be lucky novices? Are you a lucky novice? Is one of the short stacks still limping half of his hands despite astronomical blinds? All of these considerations will play a part in your decision to chop or not. If you honestly believe that you are the best player at the table or that the small stacks will chip themselves off rapidly, it’s worth waiting a bit to discuss the chop situation. Getting down from 7 to 4 players will raise your payout considerably, even if you then agree to a chop. If, however, this is your first time at a final table and you’re not quite sure how you got here (or what to do next), then take the best poker chop you can get. Pronto!

What are the social pressures of the current situation?

Social pressures to chop should not be ignored. Is the tournament in your favorite poker room where you play every week? Or are you on vacation, never to see the other players again? Anyone who has seen a player repeatedly and adamantly refuse to chop knows the resentment that can build against that player. Being hated is one thing if you’re a stranger. It’s another if you’ll be playing with many of the same people tomorrow. The consequences of being “the jerk who wouldn’t chop” are not only social, they’re monetary. You’ll likely find yourself at a final table with some of the same people again. If you refuse to chop this time around, they’ll remember. And if you’re the small stack next time, you won’t see any part of that chop. We’ve seen players dwindle to two big blinds waiting to chop until “that jerk” has knocked out.

Ok, let’s say you decide that, for a combination of the reasons above, you are interested in exploring a chop. What next?

There are a variety of ways to chop a prize pool, but we’ll restrict ourselves to the three most common below (and then throw in a creative variation that we have seen).

The equal chop is the most basic and easiest tournament chop to calculate. Simply add up the remaining prize pool and divide by the number of players. So if there is $4,200 left in the pool and 7 players remain, everyone gets $600. It’s that easy. If you’re among the short stacks and an equal chop is being thrown out there, by all means, grab it. If you are one of the top stacks at the table, you will want to keep reading.

The second option we’ve seen (although only rarely) is the Chip Chop. In a Chip Chop, everyone gets a share equal to their current proportion of the chips in play. If the chip leader has 50% of the chips she gets 50% of the remaining prize pool. If the small stack has 5% of the chips in play, he gets 5% of the pool. The smallest stacks would be wise to refuse if they have any chance of making it to the next payout. In this raw chip division by stack size, the chip leader is significantly over-compensated for her current status compared with the probable tournament results (and conversely short stacks have their equity minimized). With this method, sometimes a very large-stacked chip leader can actually be awarded more than first-place money!

The most sophisticated method of chopping gives weight to current chip stacks not as a raw percentage, but as the probability of each player’s likely average payout. Put another way, ICM assigns a cash value to each player’s current stack. A simple ICM chop calculator, such as the one available at Advanced Poker Training, allows you to select the number of players remaining and enter their chip counts and the remaining payouts for each position. The calculator will then generate values based on these factors, running them through the ICM probabilities. ICM chops typically increase payouts (compared to the Chip Chop) of the bottom stacks and keep middle stack payouts similar. The top stack payouts generally diminish enough to recognize the many scenarios in which he’ll finish lower. 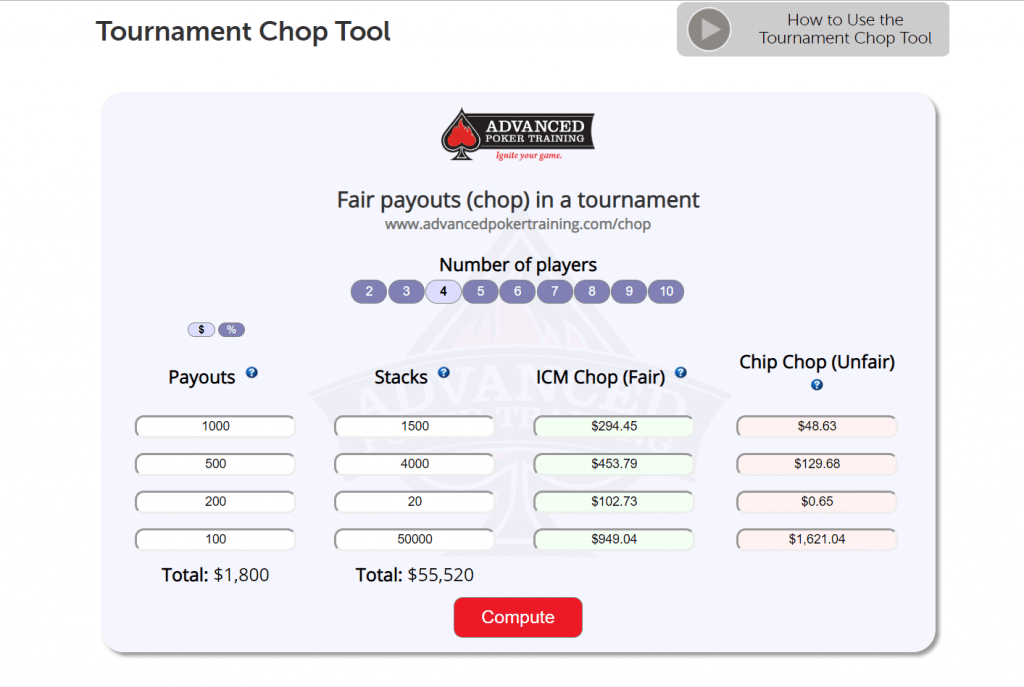 The ICM Chop both recognizes the current situation and the true probabilistic value of each player’s chips. However, players who have never heard of ICM often find it challenging to understand. They may not see how it’s fairer than an even chop and thus resist this solution.

Sophisticated cardrooms will sometimes do ICM calculations for you if you ask. We’ve had floors make calculations at both The Venetian in Las Vegas and The Playground Poker Club in Montreal. Other floors will act like you’re crazy if you request an ICM calculation. Just in case, it’s wise to make sure you have easy access to an ICM calculator yourself.

How do you determine the best poker chop?Click To Tweet

A variation of the full chop is to chop only part of the prize pool. This leaves a significant piece intact for those who still want to go for the gold. Five remaining players may agree to chop a chunk of the pool, allocating $500 per person, and leaving $1,600 unclaimed for the winner. This method recognizes the work that the remaining players have done to get to this point, yet leaves the possibility of a big payday for the eventual victor. Sometimes the partial chop solution can get players to an agreement in situations where none of the above options can.

Whichever chop option you decide to pursue, patience and communication skills are king. Attempting to bully resistant players will generally get you nowhere. And allowing yourself to get angry because players refuse a “perfectly reasonable chop” can lead to blowing up your stack minutes later when you make an impulsive all-in out of frustration. Not that either of us has ever done that with a huge payout on the line. But let’s just say it wasn’t me.