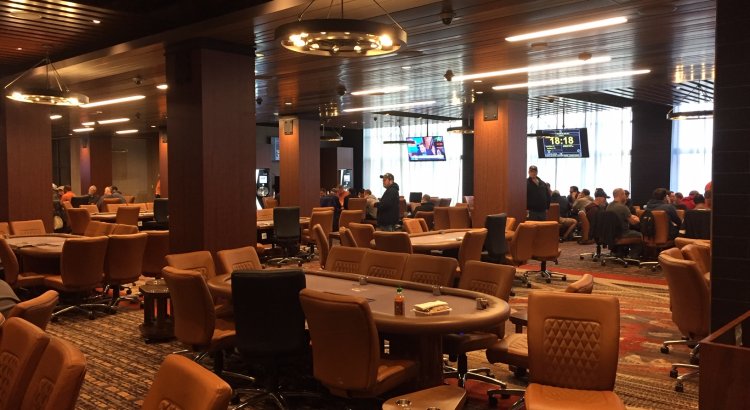 The opening of the MGM Springfield in August 2018 brought in the era of full scale casinos in Massachusetts. It beat the highly anticipated Encore’s target opening by a full year. With the first legal poker room in the state, the MGM Springfield is an early indicator of Massachusetts’ ability to match up against the established Connecticut poker scene. Economic indicators in the first months have been mixed, but generally the start has been strong. The MGM Springfield poker room has been growing over its first 4 months, recently adding a few weekly tournaments.

We celebrated the 2019 New Year with a visit to the MGM Springfield poker room (a 75 minute drive for us) and its standing Tuesday morning tournament. We came away unfortunately frustrated, and able to assign only an incomplete score to the MGM Springfield poker room itself.  In short, we came to play a New Year’s Day tournament, and despite arriving just 5 minutes after the start, found we were alternates 14 and 15.  This seemed surprising, as the room was not nearly full. We discovered that the MGM was only able to run 2 tournament tables because (they claimed) several dealers had called in sick.  A regular player, however, commented that management did not plan for an uptick in volume on New Year’s Day. This indicates that the Tuesday tournament has a small showing in general. So buyer beware if planning to play a tournament here in the near future.

One of the floors did open a third table during the second level and dealing himself, but that still left us out in the cold.  By level 3 the alternate list was back up to 15-18 people beyond the 30 seated. As that level neared an end with no additional dealers in sight and the next level bringing the starting stack  down to 50 blinds, we abandoned hope, got our money back, and headed to Foxwoods.

Due to our inability to actually play at the MGM Springfield, we will share what we observed about the casino in general, along with our trace impressions of the poker room. We also feel we should mention that we have been struck by how minimal the poker page of the MGM Springfield page is (as of January 2019). There is literally nothing informative on this page. No description of the room, no listing of weekly tournaments. Nothing. The webpage directs you to their Twitter page. The poker page (useless as it is) is also nearly impossible to find if you start at the casino’s main page.

Maybe the website should have been a hint of the low esteem with which the MGM Springfield values poker players.

The MGM Springfield is right off both routes 91 and 291 in Springfield, with very easy access.  The adjacent parking garage is large and free. The casino’s urban setting of a medium-sized city attempting reclamation, presents some challenges.  Apart from the casino, there is not a lot in the immediate area to attract visitors. We’ve spoke with recent visitors who complain about this fact and report feeling a bit unsafe wandering beyond the casino.

However, the MGM Springfield builders did an excellent job integrating the look of the complex into its immediate neighborhood.  The casino does not overwhelm its surroundings or look out of place. In fact, if you did not see the MGM signs, you would not be aware that there is a casino here. The building’s brick and stone facades are stylish without being ostentatious.  Inside and out, the complex reflects a merger of the modern and the retro-traditional. One such feature is the MGM’s beautiful outdoor courtyard that sits in front of a refurbished castle-like armory.

The entire MGM Springfield complex is moderate in size. Navigating the casino floor reminded us a bit of the ease of The Rivers in New York. The MGM has all the features of a full-service casino (i.e., slots, table games, restaurants, and a hotel), but is very manageable. The interior of the property continues the modern-urban, attractive, but understated feel. A stone walkway loops around the central gaming area, with brick and stone walls. Like The Rivers, the entire casino is non-smoking.

Although there are a couple of upscale restaurants, most of the food offerings are moderately priced. The food court, the South End  Market, offers a nice array of offerings at a good value.  There is a seafood place, an Asian noodle spot, a grill, a diner, a burrito area with apparently fresh ingredients, and a wine bar.  We grabbed a couple of pizza slices at the Cal Mare Pizza Counter on our way out. Both slices, a white pizza and pepperoni, were quite good, but perhaps a bit overpriced.

We did not stay at the hotel, but from the pictures on the website it looks gorgeous. Early reviews on Hotels.com are in general very positive.

The 23 table MGM Springfield poker room is walled off from the rest of the casino. This keeps the noise levels down nicely.  Table spacing is generous, and the chairs we sat in while we waited for seats in the tournament were comfortable. The temperature in the room was fairly ideal. The poker room has a couple of particularly nice features. There is a self-serve drinks station, offering coffee, juice, soda and water. The only other poker room we have seen with a drinks machine is the Casino de Montreal. There are also low tables that move around the room to be used to rest drinks or food. Finally, the MGM poker room actually boasts windows! To the outside and everything! It was very nice to experience a poker room that does not feel like it was built in a basement.

Because our experience was cut short we can not comment on dealer quality. The one thing we can take away from the day is that the MGM Springfield poker room seems woefully in need of improvement of the professionalism of their floors. The floors made no announcements/updates on what was happening. Players on the waitlist had to individually inquire with staff or get the information from other guests waiting. The floor staff projected an attitude of “not my problem” and “nothing to be done” which was very disappointing in a poker room backed by a brand as notable as MGM.

The staff at the registration cage were equally uninformed and unhelpful. The general response to the situation felt like opening day. The complete lack of recognition for how badly they had botched the situation was striking. The only acknowledgement that all was not business as usual came from the cage staff when we cashed back out an hour in to the tournament so that we could head down to Foxwoods for a tournament that we knew would go off. While alternate lists for tournaments are certainly not unheard of, we have never seen the breaking point at 2 tables. It is one thing if there are over 10 tables and people are registering an hour in. But players who arrived well before the tournament start were put on the waitlist: being 5 minutes late and being 15 deep is just unprecedented in our experience.

MGM Springfield has quickly developed a very active cash poker scene. While tournament offerings have built more slowly, there are indications MGM Springfield is planning to grow that as well.Click To Tweet

As of this writing, the MGM Springfield poker room hosts three weekly tournaments on Sunday, Monday and Tuesday mornings at 11:15.  That schedule seems odd and may reveal a half-hearted commitment to tournaments. The structures are middling. The Monday and Tuesday tournaments are $100 buy-ins for 10K chips with a $10 staff bonus for an additional 5K in chips.  So for the $110 entry, the house withholds $30 for rake and staff. Twenty-seven percent is a steep rake for a non-charity poker room. Blind levels are 20 minutes and there is a single re-entry opportunity.

A look at the just released January tournament schedule on MGM Poker’s Twitter account indicates that the MGM Springfield plans to add a turbo tournament Monday through Thursday evenings. They are also holding a Borgata Main Event satellite and a $50K guarantee multi-day event at the end of January. These are hopeful indications that the MGM plans to focus more on their tournament games, but it also seems like putting the cart before the horse given their New Year’s day performance.

The MGM Springfield poker room’s tepid approach to tournaments is a reflection of their clear prioritization of cash games. They are certainly the bell cow. On this day, there were only about 6-7 tables active. However, we ‘ve been tracking their activity daily on Bravo Poker, and their cash volume is consistently very strong. Many days they rival the region’s cash mecca, Foxwoods, for the number of active cash tables.

Maybe someday we’ll return to play at the MGM Springfield poker room and revise this review. But that day will not come soon. The MGM Springfield poker room would seem on the surface to have the factors necessary to make it successful. The location is accessible from major highways, and the complex is beautiful and tastefully constructed with plenty of gaming options and non-gaming amenities. But the poker room appears to be struggling in terms of management and personnel.

Maybe we can chalk this experience up to growing pains. But the MGM Springfield poker room needs to get their act together quickly. When the Encore opens in Boston in six months, with its promise of 95 poker tables, the Central Massachusetts crowd will be heading east, not west. Or they’ll continue heading south to the Connecticut casinos or north to the vibrant New Hampshire poker scene. There are just so many better poker options in New England. Maybe MGM just doesn’t care about poker. Although expanding the tournament options so dramatically in January 2019 would imply otherwise.

The MGM Springfield poker room would seem on the surface to have the factors necessary to make it successful. The location is accessible from major highways, and the complex is beautiful and tastefully constructed with plenty of gaming options and non-gaming amenities. But the poker room appears to be struggling in terms of management and personnel.