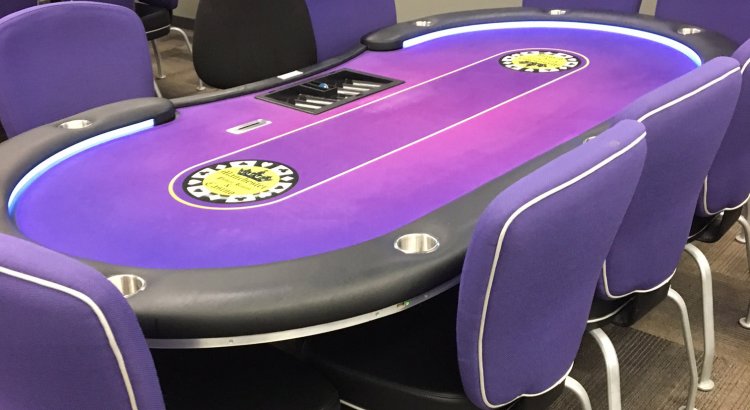 The Manchester Poker Room and Casino is one of the longstanding members of the active New Hampshire poker scene. Among the larger, most active rooms (15 or more tables) in the state it occupies a unique niche.  It is the one room without a competitor within several miles.  Less than half an hour south in Nashua the Boston Billiards Club and Casino is yoked with The River Casino. Newcomers Chasers and Cheers lie two miles apart, battling it out in Salem. While over on the coast, about 40 minutes East, the Hampton Falls and Seabrook poker rooms compete for both cash and tournament players.

But in the center of  southern New Hampshire, the Manchester Poker Room and Casino stands alone. The room shows signs of that independence: confident, unique, but perhaps a bit insular. All told, Manchester offers an alternative poker experience in New Hampshire.

The Manchester Poker Room is just a minute off Route 293, an offshoot of route 93, the major north-south expressway that bisects New Hampshire.  Despite its geographic convenience, when you leave the highway it’s a bit tricky to find.  The poker room sits behind a set of retail stores, and its sign is not very prominent from the road.

South Willow street is packed with strip malls, fast food outlets, car dealerships, and gas stations.  On the opposite side of Route 293 is the Mall of New Hampshire. So if you have shopping and dining needs, you will be well-served in the immediate area.

The poker room used to be a small movie theater and retains tell-tale remnants of that history, such as box office windows.  The Poker Room shares the building with the Manchester Bingo Room. The poker room itself hosts a few table games as well.

The South Side Tavern also lies between Manchester’s two separate poker rooms, and provides food and beverages to the poker rooms. The Tavern’s menu is extensive, with a wide array of appetizers, sandwiches, salads, pasta, pizza, and dinner entrees. We have not eaten there, but we have heard positive reviews of the food. A full bar is available, and the tap and bottled beer selection looked good. You won’t go hungry or thirsty here!

The Manchester Poker Room has just about the brightest room and table lighting I have seen.  In the main room, bright fluorescent lights make it easy to see your cards and the board.  The trade-off is that Manchester lacks the  overall cozy ambiance of a room like Chasers.  In the main room, there is good spacing between tables, and the chairs are quite comfortable.  The main room has 4-5 large TV screens and several other small ones. The secondary tournament room is quite a bit darker, but remains spacious with good table spacing and comfortable chairs.

There are 30 tables between the main and secondary rooms, so Manchester has decent capacity. One standout feature of the Manchester Poker Room is the tables themselves: nice clean, attractive with bright purple felt. There is a purple light glowing under the rail that gives the tables a fancy, pleasing appearance. Best of all, there are USB ports at each chair. For those of us who have phones with poor battery life, this is a godsend. The tournament room still has several older standard green felt tables, but all of the tables in the main room are new.

The one drawback in terms of physical amenities is that the poker chips are very dirty, sometimes sticking together.  They definitely need a good wash. 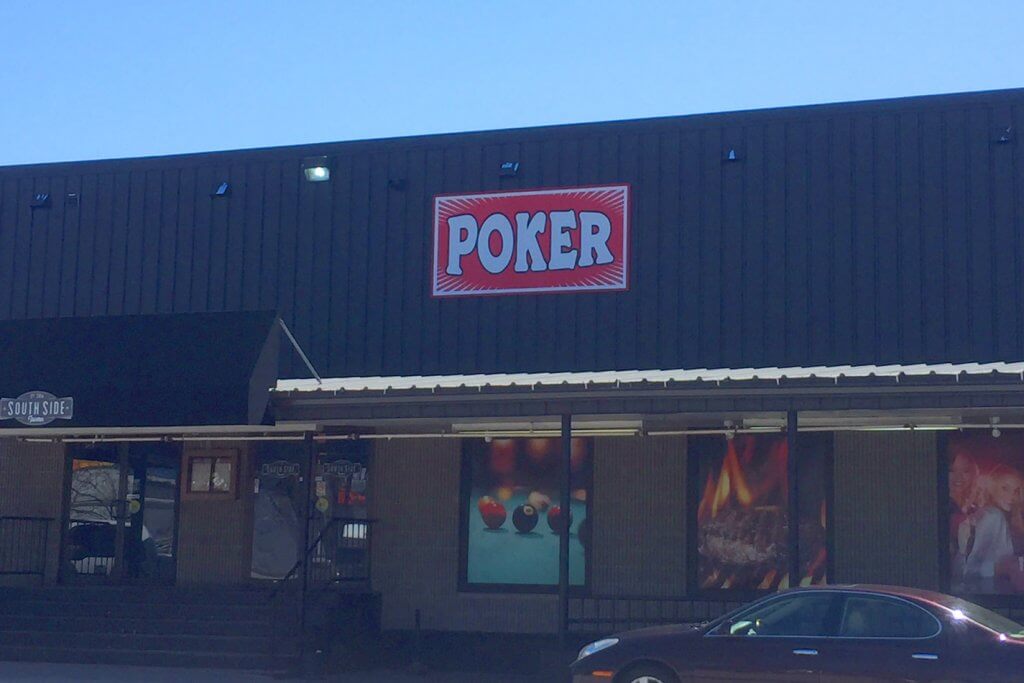 The staff welcomes you at the check-in table with a friendly and welcoming greeting.  There is a nice informal and open atmosphere. In contrast to some other rooms, you get the feeling that the Manchester staff do not take themselves too seriously. That climate continued with the dealers, who are friendly and talkative. However, this did not detract from their competence.  Essentially all of the dealers were very skilled, and things moved along well in the most recent tournament we played at Manchester. In fact, the dealers did such a good job that we have no particular commentary on the floors, as floors were never called during the six hours of tournament play that we experienced on our last visit.

The wait staff was exemplary. They came by frequently to ask for orders and were friendly, active, and efficient. The Manchester Poker Room creates a customer-focused environment, catering toward the fun and enjoyment end of the poker experience.

The Manchester Poker Room has the most individual, unique character among the major New Hampshire poker roomsClick To Tweet

The player mix at the Manchester Poker Room will likely divide people. As we discuss in more detail below, the players we have encountered there tend to be on the loose end. They also appear to be here as much to have a good time as to play serious poker. This is not to say there is not some decent play. There is, and far from the worst play we have encountered. But there seems to be a contagion effect, as the wildest players do their thing, others join in.

The room clearly has a strong core base of regulars.  They know each other’s games, and will talk a bit of friendly trash. There are clearly many internal rivalries. All of this, creates almost a large home game feel. There is also a party atmosphere. During our recent Saturday afternoon sojourn, we witnessed more heavy midday drinking at the tables than we have encountered elsewhere. You can imagine the effect this had on the loose play and table talk. For a new player to the room, it can be easy to feel outside the loop.

Those who love a fun, familiar, and freewheeling atmosphere, will be right at home. If you prefer a more subdued, focused atmosphere at the table, Manchester may not be for you. 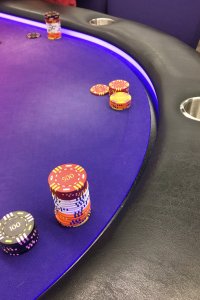 We played this the 50/50/50 about a year ago, and you definitely have to buckle up and enjoy Mr. Toad’s Wild Ride.  Play was loose and reckless, calls on gut shot draws for large bets were not uncommon. Players are looking either to double up or rebuy. Pots grew huge even when most stacks were 100-200 big blinds deep. Frankly, the game was not our cup of tea, but other players were clearly loving it.  That evening fielded about 80 entries with a lot of add-ons.  Thus payouts were solid, which attracts the action junkies as well.

We most recently played in Manchester’s Saturday 1pm tournament. As many NH poker rooms are, Manchester is positioning against the Hampton Falls popular $90 Saturday tournament.  A $90 buy-in at Manchester gets you 30,000 chips and the $10 staff bonus yields another 10,000.  No rebuy in this one, and 20 minute blinds (recently reduced from 30 minutes I believe). While this tournament played slightly saner than the 50/50/50, it still contained a mix of loose aggressive players and calling stations.

Among the many poker rooms at which I’ve played, Manchester is perhaps the most and least welcoming at the same time. The staff are friendly, relaxed, and gregarious. Manchester is one of the most laid back poker rooms we have played. The downside is the strongly cohesive player population which can create an atmosphere making you feel like an outsider. And if loose, aggressive play is not a style you love playing against, Manchester will be tough.

However, overall, this is an attractive, well-run room with quality staff. For those who like the gregarious, fun part of poker, this would be a good fit, especially if you are looking to find a regular room to play.

Update: See why we named Manchester one of the best poker rooms in New England!

The Manchester Poker Room and Casino holds unique stature in the busy New Hampshire poker scene. As opposed to the other large Southern New Hampshire rooms, Manchester lacks a hyper-local competitor. This leaves Manchester with the most discrete player population and a very distinct vibe. The laid back environment makes Manchester feel like a large home game. Players are there to have fun. Overall, the room is comfortable, with good creature comforts and friendly, capable staff.