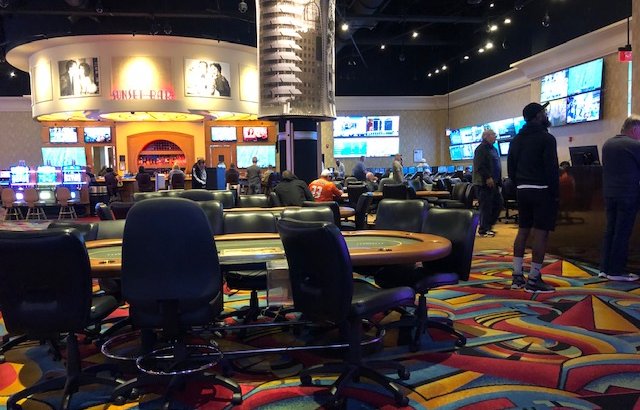 The Hollywood Casino Perryville poker room is a small poker room without the profile of other Maryland rooms such as Maryland Live! or MGM National Harbor. However, Perryville had an intriguing Sunday tournament (30-minute blinds!) when we were staying around Baltimore. So we headed up the road about an hour north of Baltimore to check it out. 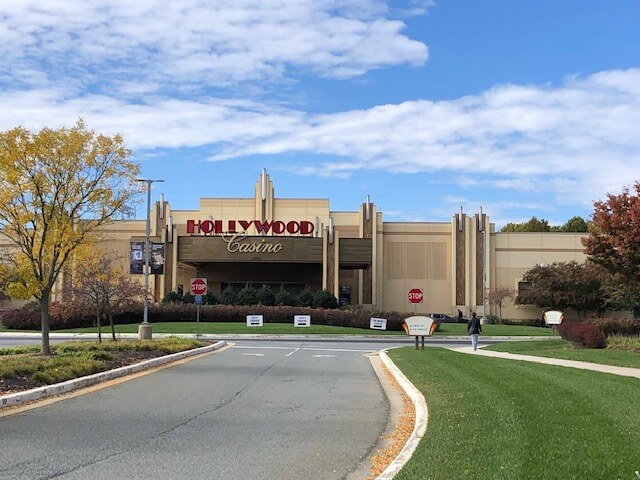 The Hollywood Casino Perryville is located a couple of minutes off Interstate 95 on the east side of the Susquehanna River in Maryland. It is very easy to access if you are on an excursion up or down the East Coast. It is a small but full-service casino with slots, table games, and a Barstool sports book. But when we say small, we mean small. You can walk the perimeter of the single room in about 3 minutes. Thee are about about 10-15 tables of blackjack, roulette, craps, and the other basics, the rest is pretty much slots all around. Right between the poker room and a small bar is an off-track-betting area as well. As with all Maryland casinos, the Hollywood Casino Perryville is blessedly non-smoking. 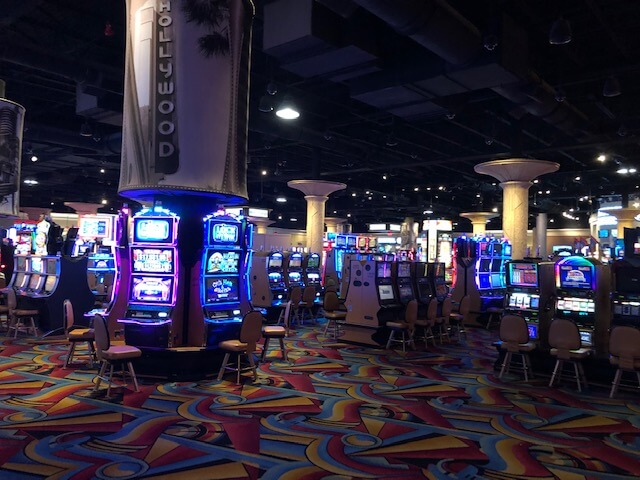 Dining options are minimal here. The Barstool sportsbook offers a casual restaurant and there is a food court style Hollywood Express where you can get salad, fries, burgers, snacks and drinks. The casino does not include a hotel, but when we visited there was a construction project right next door that will eventually be a Great Wolf Lodge – a well-known hotel and indoor water park chain.

The 6-table poker room at the Hollywood Casino Perryville is immediately on the right beyond the main casino entrance. The poker area is entirely open to the casino which was blaring 70s and 80s music throughout our visit. Suffice it to say, between the music and slot machines, the poker area was quite loud. The ceilings of the casino are very high, however, creating decent ventilation. The casino itself is quite dark and the lighting over the poker tables is not great. It was sometimes a bit hard to differentiate suits from across the table. The casino was also very cold. 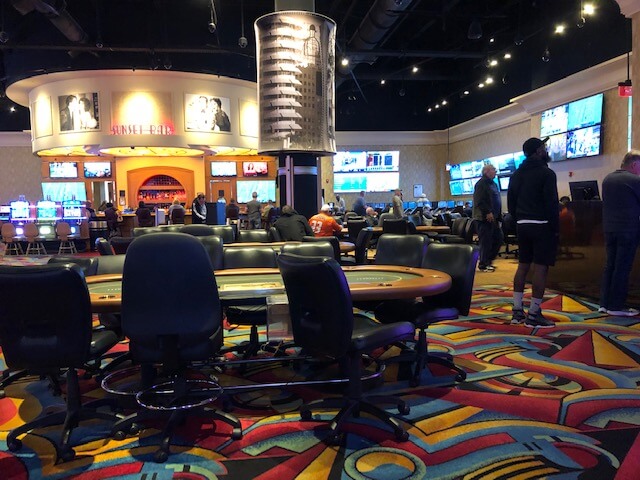 The tables are decently spaced, and feature auto-shufflers, padded rails, and drink cups, but no USB ports. The “room” is reasonably clean and the felts and leather on the rails looked brand new.

The chairs do not have arms, but they are adjustable and have wheels. While they have some padding, they are not very comfortable. The felts, cards and chips are all branded. When we visited, some of the chips had built up dirt on them and could use a good cleaning. Play was 9-handed and the tables felt a bit small. Nothing terrible but not roomy either.

The floor staff started out well, announcing rules as the tournament started and handling a dealer mistake in the third hand of the tournament very well. The floor stopped the clock, reviewed the tape, and recreated the flop which was mistakenly swept. Despite this mistake, the dealers also started out solid.

However, as the tournament went on, things deteriorated.  Dealers made a couple of incorrect rulings and completely failed to control a problematic player who consistently violated rules about discussing the hand while in action. In fact, toward the end of the tournament when three-handed, he was not in the hand and told one player he should call the third player’s shove. The dealer did warn him this time, but it was far too late. The player also became verbally aggressive several times, which was never addressed.

The floors, unfortunately, became less of a presence as the tournament wore on despite the fact that they were ever only managing two tournament tables and one cash table. The level of inattention seemed odd for such a small room.

Wait staff circulated right at the end of the first 30-minute level and occasionally popped back, although not frequently enough for some players.

The players at Hollywood Casino Perryville poker room were mostly regulars who generally played fairly predictably. There was a wide range in ages and ethnicity, with several women in the tournament. There was one exception as a guy went all in for 30K at 100-200, and then went 25x on a pre-flop raise. His wild play, sadly got him all the way to the end of the tournament. Players were generally friendly with the exception of the aforementioned over-better (who was also the problem child mentioned above).

Hollywood Casino Perryville is a very small room, but on a Saturday late afternoon they typically have four $1/$3 tables running and one $2/$5 table. The Sunday we attended there was only one table of cash alongside the two tournament tables. If you are interested in cash poker play in the region, be sure to check out our Poker Room Cash Activity Map.

The Hollywood Casino Perryville poker room is a convenient stop along Route 95. But it's small, loud, and needs upgrades in several areas.Click To Tweet

Hollywood Casino Perryville typically hosts a single tournament on Sundays and each day Tuesday through Friday. Buy-ins generally range from $60 to $150. Blinds are 15 to 30 minutes with the Sunday $150 having the 30-minute structure. Rake for the $150 was a very reasonable 19%, but the $100 tournaments get up to a 29% rake. The $150 did not have any add-on or re-entry, but tournaments on weekdays generally have one or both. The blind levels are fairly gradual, and with decent starting stacks (20K to 30K) the overall structures are solid. Play was particularly strong mid-tournament when the 30-minute levels and gradual blinds delayed the shove-fest. We had 27 entries in our Sunday tournament across two tables  (a bunch of re-entries occurred).

The Hollywood Casino Perryville poker room is a convenient stop along Route 95. But it’s small, loud, and, frankly, needs upgrades in several areas. They need to get more comfortable seating and better lighting over the tables, and clean the chips. Given the one-room nature of the facility, there not much they can do about all the noise. However, they could focus on training their floors and dealers to manage tables better, particularly when there is repeated rule violation or poor behavior by players. Floors should be more attentive in general to what is happening at the tables. Sadly, despite a decent tournament structure, this was one of the weakest poker rooms we have played in.

The Hollywood Casino Perryville poker room is a convenient stop along Route 95. But it’s small, loud, and, frankly, needs upgrades in several areas. They need to get more comfortable seating and better lighting over the tables, and clean the chips. Given the one-room nature of the facility, there not much they can do about all the noise. However, they could focus on training their floors and dealers to manage tables better, particularly when there is repeated rule violation or poor behavior by players. Floors should be more attentive in general to what is happening at the tables. Sadly, despite a decent tournament structure, this was one of the weakest poker rooms we have played in.