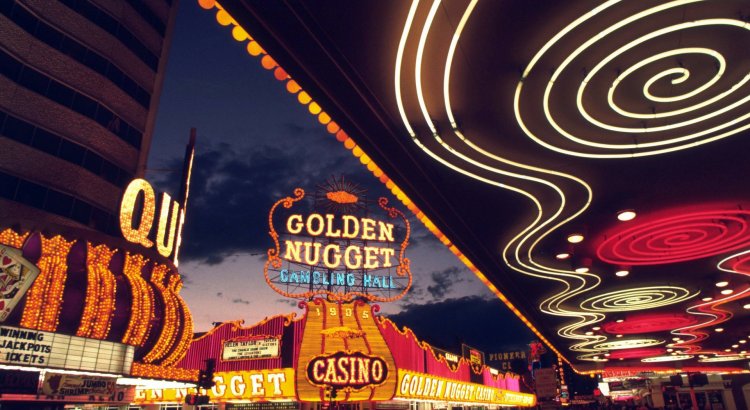 While the Strip draws the vast majority of poker players in Las Vegas, there are several poker rooms off the Strip. One of our favorites is the Orleans, which we have visited multiple times. The Golden Nugget poker room provides another option right in the center of Downtown Vegas. Offering smaller, more intimate atmosphere than many poker rooms on the Strip, the Golden Nugget presents a nice respite from the wild action along Fremont Street.

The Golden Nugget resides in Old Vegas, sited downtown between the famed Fremont Street and East Carson Avenue. It’s right across from Binion’s, the original home of the World Series of Poker. For those who have not been, Fremont Street is a scene. The locale features street performers, a zip line, vendors selling all manner of wares, and people in all sorts of costumes (some minimal). Perhaps not necessarily where you would take your 8-year-old, but a fascinating melting pot of Vegas decadence that is worth at least one visit.

The Golden Nugget’s parking is not free for the public, but if you play in the casino they will validate your ticket. We got our ticket validated at the tournament registration desk and our parking was indeed free.

The Golden Nugget is a midsize casino that offers the full array of slots, table games, poker, and a racing and sports book. The hotel looked very nice as we passed through, with a very busy and attractive pool area.  There is a good variety of restaurants headed by a high-end steak house (Vic & Anthony’s) and a seafood restaurant (The Chart House). Of course, the Golden Nugget also offers the casino staple buffet experience, along with Italian, Asian, and Mexican restaurants.

The casino also offers a variety of bars, including one with video poker right outside the poker room.

The chairs were adjustable, well padded, and very comfortable overall. Cash play was 9-handed, so space at the table was not an issue.  Table felts were clean and well kept. Likewise, the chips were a bit old but very clean. Although the poker room felt dark, the tables were well lit, making it easy to see the board. The tables were set close together. However, this was a necessity given the small footprint of the room. 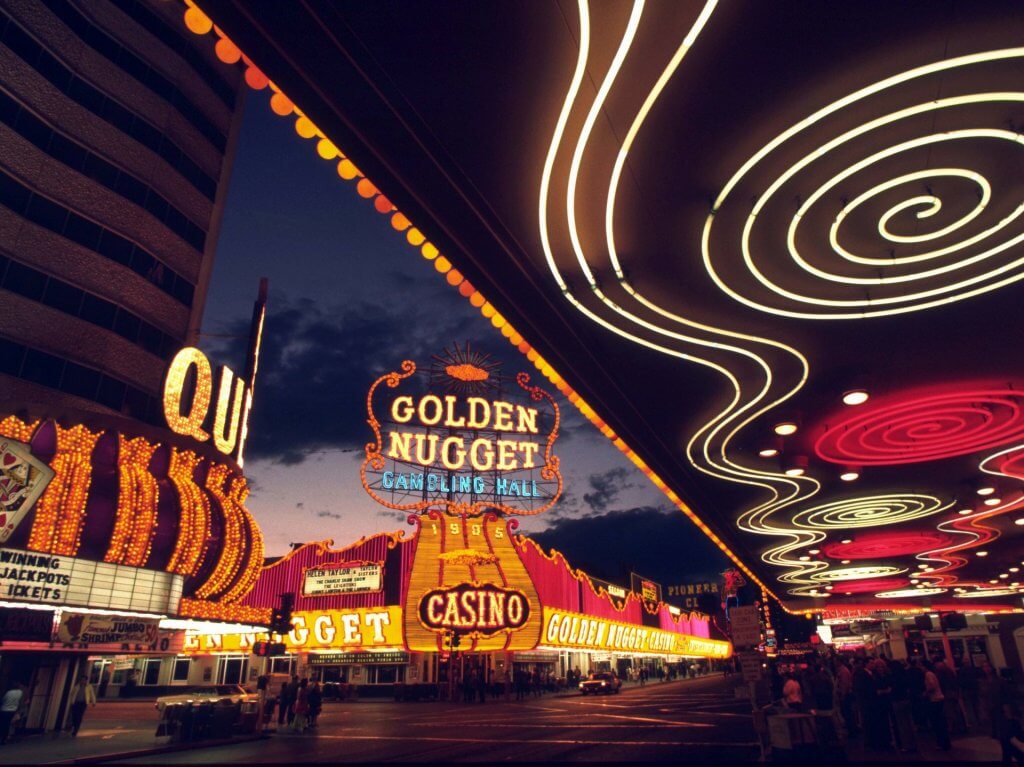 Every dealer I encountered in both my cash game and the tournament we played was very good. Dealers were fast, knowledgeable, and generally pleasant. The floors ran the large tournament well. In the cash room, I was greeted with a friendly welcome and immediately shown to an open seat. There was a highly professional air all around. Wait staff circulated frequently in both the tournament and the cash poker room.

Players in both the tournament and at the cash tables were generally pretty solid. About 15%-20% of the players were women. There was a wide range of ages, and people tended to be friendly with only the occasional irascible soul.  The cash table I experienced featured several very aggressive players. Raises at this $1/$2 game were generally to $10-$12. But occasionally there was a limped pot as well. The Golden Nugget allows a button straddle, which a couple of players regularly employed. The skill range at the cash table was considerable. One player was quite adept at ratcheting up and down his aggression, while another was spewing constantly. Among the tight players, some just could never get off the mark to get in a hand, while others chose their hands wisely and profited.

The special tournament (part of the Golden Nugget summer series during the WSOP) that we played at the Golden Nugget drew a sizable crowd and was very well run. It was set up in one of the hotel ballrooms. As with all temporary poker set ups, the standard banquet chairs were excruciating after the first couple of hours. However, the ballroom was bright and otherwise comfortable.

If you are ever in Vegas during the WSOP, definitely look up what’s on tap at the Golden Nugget. The buy-in was reasonable ($150), with a good structure (15K starting stack, 30 minute blinds, rebuy option), and the tournament drew a few hundred people most days. The rake (26%) was a bit high compared with tournaments offered at some other venues, like The Orleans, Planet Hollywood, and the Daily Deepstacks at the Rio. But This Golden Nugget tournament is worth throwing in the mix.

The Golden Nugget’s normal tournament schedule contains three or four tournaments each day, most at a $50 or $70 buy-in with 5,000 and 10,00 starting stacks, and 20 minute blinds. Again rakes for these events are high: 34% for the $50 events and 27% for the $70. However, there is a Sunday morning $125 tournament (15K starting, 20 minute blinds for first 8 levels, and 30 minutes thereafter) where the rake is only 20%. The Golden Nugget calendar seems to indicate that they offer higher buy-in special series fairly often as well. 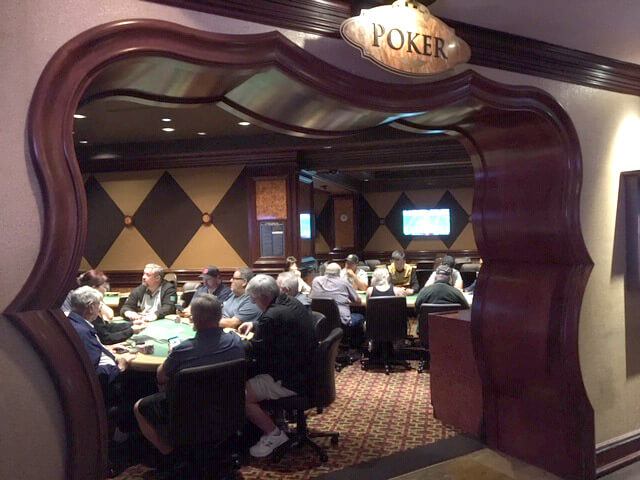 When we visited, the Golden Nugget poker room had seven active cash tables on a Monday at noon. However, this was during the World Series of Poker and I had busted out of a tournament series being held in the ballroom, as had other players at my table. On a Monday evening as I write this, there are three active $1/$2 tables and three $2/$4 limit tables. Tuesday shows five $1/$2 tables and two $2/$4 tables. It seems that typical weeknight evenings will offer three to five $1/$2 cash tables with a couple additional tables on weekends.  $2/$4 limit is also a popular option, and there may be a table or two available as well.

The Golden Nugget poker room proved a pleasant surprise. My relatively short tournament run allowed me a couple of hours in the cash room while Heather continued grinding. The highly competent poker room staff keeps things moving while creating a friendly atmosphere. The volume of cash games and number of tournament tables during typical days at the Golden Nugget will not be high. But if you are staying Downtown or sightseeing for the day, the Golden Nugget is a good option to experience a professionally managed poker room.

The Golden Nugget poker room proved a pleasant surprise. The highly competent poker room staff keeps things moving while creating a friendly atmosphere. The volume of cash games and tournament tables during typical days will not be high. But if you are staying Downtown or sightseeing for the day, the Golden Nugget is a well-managed poker room.