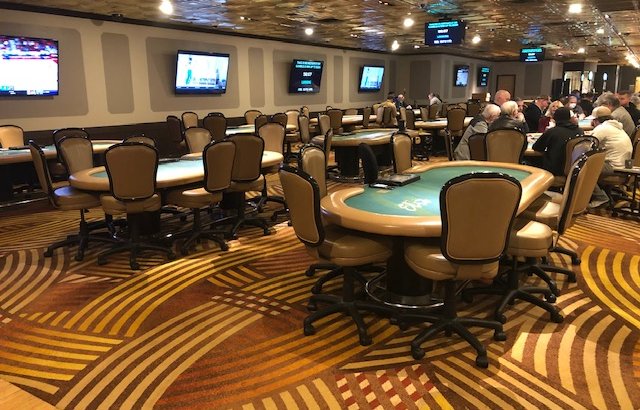 The Ebro Poker Room was the closest room to us when we spent a week in February 2022 on the mid-panhandle of Florida. It was thus a natural place to check out a tournament. The drive ended up to be a bit more taxing than it appeared on a map, and the entire experience was a mixed bag.

The Ebro Poker Room is located at the intersection of routes 20 and 79 on the Florida panhandle. It lies about 20 minutes directly north of Panama City. The room is about an hour and a half west of Creek Entertainment Gretna poker room and about the same distance east of the Pensacola Greyhound Track.

Be careful if you are traveling from the shoreline of the Panhandle near rush hour. What should have taken us 20 -25 minutes from the Santa Rosa Beach area took us 40 minutes instead.

Ebro Poker Room redefines the meaning of isolated. There is literally nothing within 15-20 minutes of the facility in any direction. The area immediately around the poker room is very wooded and dark at night. Also (bonus) it is riddled with deer looking to jump into the road in front of your car. The building itself is very nondescript and looks more like a factory than a poker room.

Ebro features poker, a couple of faux poker games, and a small simulcast area. The evening that we visited was apparently slow in simulcasting. There were just a few people roaming around the scant, darkened area and one person taking bets. There was a nice bar across from the poker room, but the crappy beer selection was pretty uninspired. The bar menu was fairly typical: apps, pizza, sandwiches. There was a small sit-down restaurant area on the other side of the poker room that offered the same menu as the bar.

Ebro features no slot machines or traditional tables games, and no affiliated hotel. Or, as we said above, anything anywhere near the facility.

The Ebro poker room is a moderate-sized room with 17 poker tables and  five faux poker gaming tables. It is a non-smoking facility. The room is attractive, with older but nice looking wood floor and carpeting.  The moderately high ceiling was coated with metallic gold (which looks better than it sounds). The tables are reasonably spaced, although some were tucked in corners and felt a bit claustrophobic. The room is on the warm side with limited air flow. Tournament play was 9-handed.

The room is a bit dim (although the tables are well-lit with spotlights). TVs hang on walls circling the room. The room in general was fairly quiet, even when it filled up during the tournament. However, the music wandered through a wide range of genres, from classic rock to contemporary soul to sudden jolts of death metal. The chairs have wheels, padding, and are adjustable. We found them moderately comfortable. 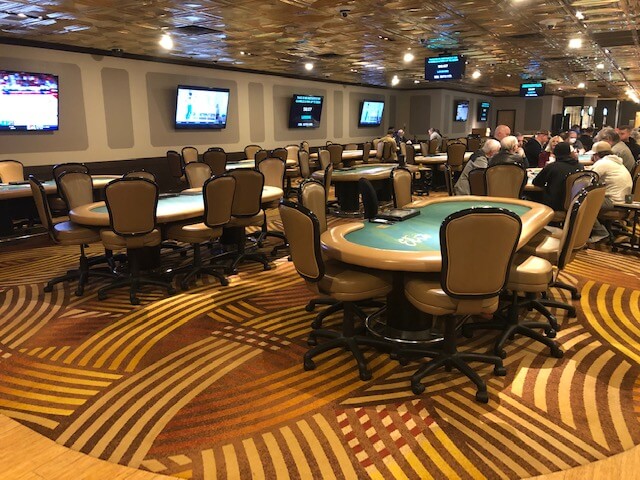 The tables feature auto-shufflers, used only for cash games, and padded rails, but no drink cups or USB ports. The room is quite clean, as are the tables. The branded chips are very clean. The cards are not branded and have small faces.

The initial floor who was running the tournament was very active, individually running around the room to find the next person on the waitlist. The room was moderately low tech, and he was keeping track of the wait-list on a piece of paper. Also, the electronic board could only show the top 10 payouts, so a handwritten sheet was added under the monitor with the 11-15th payouts (which were identical). The floor, at least, was clearly taking his job seriously.

However, the tournament floor changed as the tournament continued. The new floor seemed less certain of the rules, and there were some odd moments when the tournament approached the money. The floor ordered hand-to-hand play at the bubble with two tables, which made sense. But after the bubble broke, another floor tried to go hand-to-hand again until the players pointed out that we had broken the bubble. This floor wanted to go hand to hand without stopping the clock for the automatic 2-minute runoff, despite the fact that we were four players from the next pay jump. A couple of players, including me, questioned why we would possibly play to hand-to-hand when the next 4 payouts were the same. He made some reference to there being more than one table, saying it would be unfair if one table played slower.  We pointed out that we had never seen this done anywhere.  Eventually, he relented and we played on.

Dealers were solid but nothing spectacular. Most dealt with reasonable skill and were polite. Wait staff was variable in how often they came around.

There was a fairly wide age range of players at Ebro, including several players in their 80s. There were also a fair number of women playing compared to other rooms. Most of the players at the Ebro Poker Room seemed to be regulars. They engaged in banter about other players’ favorite hands (e.g., K2s), and held other friendly side conversations. But they were also friendly to outsiders like ourselves.

The play was fairly loose passive for much of the tournament. Even in late stages, players were limping with under ten blinds and then folding to five big blind shoves. I shoved 17 times in the tournament (most pre-flop), with stacks between 5 and 15 BBs and from a variety of positions. I got called a whopping three times.  Some players were visibly irritated by all the shoving, but it worked!

The solid personnel and moderate tournament structures at the Ebro Poker Room don't quite balance the limited environs at and around the site.Click To Tweet

The night we played, the tournament capped out at 106 entrants and paid 15 spots.

The short stack and 20-minute blind played moderately fast, but the structure was not bad. Ebro is one of the few rooms that still features $25 denomination chips and blinds that start at 25/50. In another throwback, there is no big blind ante but instead individual antes starting at level 9.  Ebro may be playing individual antes as a service to the Florida poker world, to remind everyone how barbaric individual antes are.

The Ebro Poker Room proved quite the journey from the beach while offering a middling experience. The physical plant was a bit dated, dark, and ominous, although the poker room itself was reasonably well kept. The personnel was variable. However, the tournament featured plenty of soft play that was highly exploitable.

Overall, we suggest you plan well before going to Ebro. Make sure you leave plenty of time if you go around rush hour, and have your dining plan worked out ahead of time. Given the quality of play and potential profitability, suffering the limitations of the isolated surroundings may be worth it.

The Ebro Poker Room proved quite the journey from the beach while offering a middling experience. The physical plant was a bit dated, dark, and ominous, although the poker room itself was reasonably well kept. The personnel was variable. However, the tournament featured plenty of soft play that was highly exploitable.