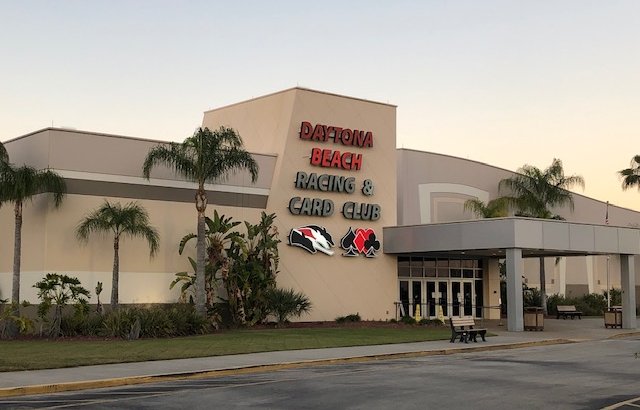 The Daytona Beach Poker Room (the Daytona Beach Racing and Card Club officially, but we’re going with the brief version here) is conveniently located less than a half-hour from our AirBnB in Ormond Beach.  We knew we’d have to fight the infamous Florida traffic to get there, but we were hoping that Daytona would prove to be a somewhat better experience than we have had at the other venues on this trip: Creek Entertainment Gretna, Ebro, and Ocala.

The Daytona Beach Poker Room is located right off route 95 between route 92 and 400. If you’re flying in, it’s practically at the end of a runaway at Daytona Beach International Airport. The world-famous Daytona International Speedway is also nearby. Suffice to say, it’s a highly trafficked area, so plan your time accordingly. Of course, there are miles and miles of beaches just to the east from which you can pop in to visit. 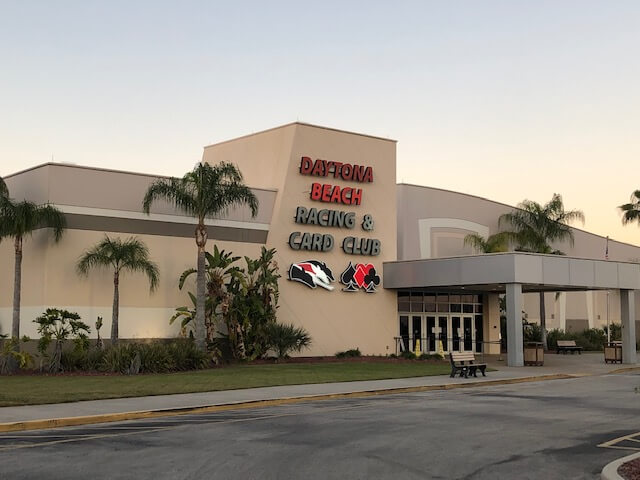 There is a huge simulcast area that fills much of the building. This is one of the nicest simulcast venues we have seen affiliated with a  poker room. It reminds us of The Brook in New Hampshire or of a Las Vegas venues. Like most other Florida poker rooms, Daytona lacks slot machines, and traditional gaming tables as these are barred except in the Native American casinos. There are 12 faux poker gaming tables, however, in the poker room itself. On the Wednesday night we visited, 11 of the 12 gaming tables were active and most of the seats were occupied.

There is no hotel on-site at Daytona but there are innumerable options nearby. The Clubhouse Restaurant was not operational when we visited. There is a small tap and grill just outside the poker room that offers a short menu. In short, don’t look for a good meal here. Again, there are dozens of options nearby. About a 15-20 minute drive toward Ormond Beach is a Mexican restaurant, La Catrina Cocina Mexicana which we highly recommend. Service is excellent, the food and margaritas are great with a wide range of options, and the food is a good value as well.

The Daytona Beach Poker Room also has a sister card room – Orange City Racing and Card Club – about 25 minutes to the southwest.

The Daytona Beach Poker Room is a large card room with 31 poker tables. The poker room is separate room from the massive simulcast area. The room was somewhat loud when we visited given the high activity at gaming tables. Daytona offers a non-smoking facility. There are convenient restrooms right in the poker room. There are also a few very comfortable leather couches in the room to crash on – should you perhaps need to wait for a significant other to finish a tournament.

The poker tables are well-spaced, the room is well-lit and the ceilings are high. However, the room was very cold when we visited. There are the typical TVs along the walls, although most are a bit small to be of much value. Tournament and cash play were both 9-handed.

The chairs are very well padded and comfortable, although they are not adjustable and lack wheels. The tables featured padded rails, but no drink cups.  There are USB ports at some, but not all, tables. The room is quite clean, as are the tables which sported new felts. The chips are branded, very clean, and chip colors were quite distinct from one another, unlike our recent experience at Ocala Gainesville. The cards are also branded.

The floors at the Daytona Beach Poker Room were variable. The floor initially started by laying out the tournament rules and starting the tournament close to on time. However, he was then absent at the first two level-ups and dealers had their backs to the clocks. The first dealer I had was a little distracted, which slowed things down a bit.  Another dealer maintained a sarcastic tone throughout, and gave off an “I hate my job” tone. Other dealers were more focused, skilled and personable. The waitress showed up immediately as the tournament started and took drink orders.

Players at the Daytona Beach poker room were stronger than those at other venues we visited on this trip: Gretna, Ebro, or Ocala Gainesville. Most of the players were local, and clearly had a lot of experience with one another. There was a lot of good-natured banter. In general, players were pretty friendly to the few tourists like ourselves. There were 6-7 women in our 34 player tournament, and the environment felt pretty welcoming.

There was certainly some aggression and bluffing, but with a fair amount of standard play mixed in. Mostly players did not make huge mistakes, so it was tough to exploit them. 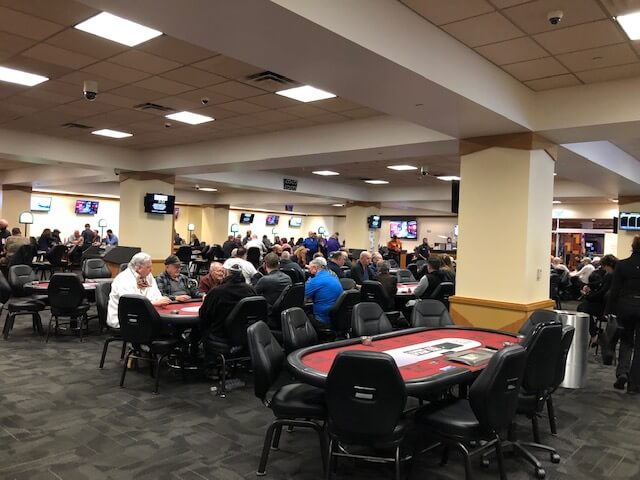 The Daytona Beach Poker Room is an active venue with much going for it, starting with a great location and attractive physical plant.Click To Tweet

There were seven Cash tables running on the Wednesday evening we played at Daytona Beach. Shortly before attending, we tracked table counts on Bravo. On weeknights, Daytona sees about 3-5 NLH tables of $1/$2 and 1-2 $2/$5 tables. Generally, there are no PLO games on weekdays and a rare higher buy-in or limit game. On weekends, they’ll have 6-7 $1/$2 tables and 2-4 $2/$5 tables. They may also have a PLO table running on weekends and a few limit hold’em games.

There are currently 4-5 weekly tournaments running at Daytona Beach.

Our $200 Wednesday night freezeout tournament ended up with 34 players. The regulars said that there are usually about 20-30 players in this tournament. They also indicated that there is a once-a-month Sunday tournament that gets over 100 players. Starting stack on Wednesday night is 25K with 20-minute levels and a pretty slow blind structure. The big blind ante kicked in at level 3 with a repeat of the 100-200 level. This structure allowed for a fair amount of decent play several hours into the tournament. There are similar weekly tournaments Friday and Saturday nights.

The Daytona Beach Poker Room is an attractive and active venue in a great location. Daytona’s cash activity is solid, not to the levels of larger rooms in the state such as Seminole Hard Rock Tampa, but there is still decent activity every day of the week. The poker tournaments generally draw modest crowds, but the structures are not bad. Daytona would benefit from more consistent dealer and floor attentiveness and attitude, but we’ve seen worse certainly.

If you’re visiting one of Florida’s mid-Atlantic beaches, the Daytona Beach Poker Room is definitely worth a stop.

The Daytona Beach Poker Room is an attractive and active venue in a great location. Daytona’s cash activity is solid, not to the levels of larger rooms in the state such as Seminole Hard Rock Tampa, but there is still decent activity every day of the week. The poker tournaments generally draw modest crowds, but the structures are not bad. Daytona would benefit from more consistent dealer and floor attentiveness and attitude, but we’ve seen worse certainly.