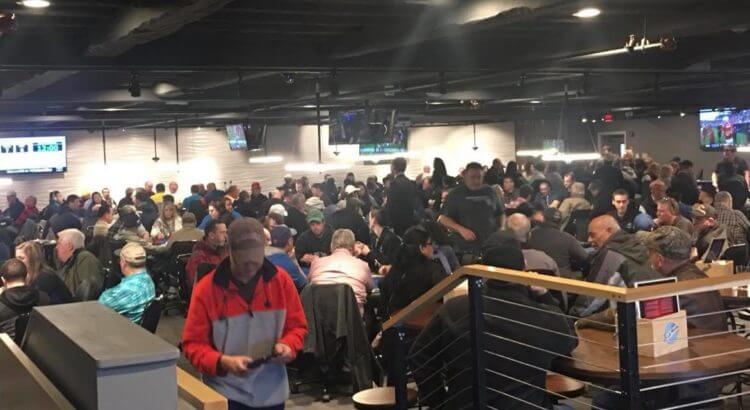 In the fall of 2017, Chasers entered the competitive Southern New Hampshire poker scene with a bang. Granted a smallish bang, at only 16 poker tables, but the immediate returns were very good. On any given night Chasers poker room fills a large portion of those tables with active cash games. Although, we don’t play a lot of cash poker, we came away impressed. There is a lot of energy in the room and the cash players were clearly excited about this Salem, NH poker room. Over five years later, Chasers has held up well over time.

Chasers Poker Room occupies the basement of a now defunct Chinese restaurant. From the outside, the building does not inspire confidence. As you enter, the initial impression is “this is dark.” But the dark feeling quickly yields to a nice homey feel, atypical for your average poker room. There is a small bar immediately to the right of the door, with seating and a few high-top tables. Along the right wall is an attractive brick fireplace which we assume will never be used. In front of this wall are the table games: roulette, blackjack, and a couple of poker variations played against the dealer.

Although the room has a dark feel, the tables are very well lit from above. We had no problems seeing the cards. The chairs are padded and very comfortable, especially in comparison to some of the surrounding New Hampshire rooms. The footprint of the room is not huge, however, so the tables are a bit cramped.

Churchill Downs recently acquired Chasers and intends to expand across the street to a new space with up to 800 gaming positions including historical racing machines (slots) and table games. We assume that Churchill downs will not be adding further poker tables to that new facility.

For the 42nd most populous state, New Hampshire has a large and vibrant poker community. Many of these rooms lie close to the Massachusetts border and pull from the the northeastern Mass. poker population. The upshot is that everyone knows one another: players, staff, owners. The competition for quality dealers and floors is as intense as the play at the tables.

Chasers did well in securing some of the better available talent when it opened. Management managed to lure some of the friendliest and most skilled dealers from existing rooms, and clearly trained their new dealers well. Floors are visible and active. The wait staff sometimes seems a bit stretched thin, but are generally attentive and working hard.

Clearly Chasers has overcome the pre-opening concerns that its branding and logo (a happy fish) are insulting to its potential clientele. A lot of the better cash players in the area have made their way here.

However, any poker room draws the gamblers. Along with the typical high hand promotions that fuel the active cash rooms in New Hampshire, at one of our tournament breaks a few years ago Chasers had a single hand event, the No Chip Flip. In the No Chip Flip players buy in for $50 each. One Hold ’em hand is dealt and the top two hands win with the cash, after the house rake of course.  Not our cup of tea, but the room was abuzz as it played out, and the house grabbed about $130 for 3 minutes of action.

Chasers has made an impact on the New Hampshire poker scene, and is clearly here to stayClick To Tweet

Chasers does not hold poker tournaments at this time.

Chasers is a very active cash poker room. On any given weeknight Chasers has seven to nine $1/$2 tables running, with up to 11 tables on the weekend. The room also has three to four $2/$5 tables at most times and two to three other tables, with typically at least one PLO table active. Given its status as a small but popular room, waitlists can run very long. We strongly recommend you use Poker Atlas to get on the waitlist before you actually arrive at the room.

In a crowded and competitive poker landscape, this seemingly humble room has made its mark. Starting with creating a comfortable environment and hiring good personnel, Chasers has made all the right decisions. On any given night, Chasers rivals the Boston Billiards Club in Nashua for the number of active cash tables. Management knows what works and how to get the players in the seats. While some other local rooms look vulnerable long-term, Chasers is here to stay. We eagerly await the developments that Chaser’s new ownership will bring.

Chasers has made a major splash in the New Hampshire poker scene since its entry into the market in the fall of 2017. With an exclusive focus on cash games, its well-trained staff and homey interior make for an excellent alternative to larger rooms. Chasers hit the ground running and is firmly implanted in New Hampshire’s poker landscape.