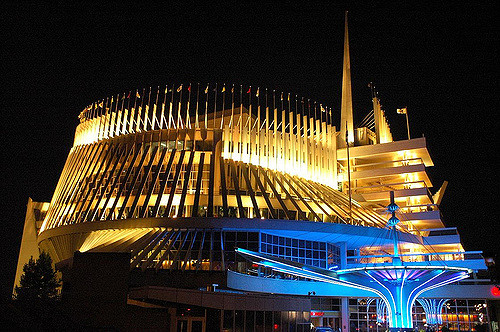 Heather and I spent a previous New Year’s vacation dodging frostbite in Montreal and retreating to the poker room of Casino de Montreal for warmth. That bitter cold experience has not dissuaded us, and this year (December 2019), we were back for our fourth Montreal poker jaunt. Our Montreal trips have been profitable, so we’re always itching to return. On this trip, we played four tournaments at the Playground Poker Club outside the city and two at the Casino de Montreal.   This visit was break-even, but that did not take away from our Montreal poker experience.

The Casino de Montreal, opened in 1993, lies on the Ile Notre Dame in the St. Lawrence River 5 minutes from downtown. If traffic is light, and weather not too treacherous, it’s fairly easy to drive over. Be warned though: at high volume times their parking garage can fill up quickly. In these cases, you may end up parking in a distant lot and being shuttled in. The convenience of having your own car disappears in these situations. As an alternative, the bus system runs out to the casino all year. In the summer there is also a special free casino shuttle which you can catch at one of 3 locations downtown that runs every half hour.

The Casino has a very futuristic look, as its two main buildings were built as exhibition space for Expo ’67. The entire casino, including the poker room, is non-smoking. It is a full-service casino with slots, table games aplenty, and a variety of shows in their theater. However, the Casino de Montreal does not have its own hotel.

Most of the restaurants are on an upper floor, separate from the gaming room.  There are a couple of very nice looking gourmet restaurants in the mix on this floor. However, we have never eaten at those. That’s because the Pavillon 67 buffet (and we’re not buffet people) is so outstanding that we never want to eat anywhere else. We eat there at least once every time we visit Montreal.  The array of excellent main courses (prime rib, shrimp cocktail, pasta, gourmet pizzas to name a few) and desserts are staggering. Dinner will run you about $35-$40 US without alcohol, so not cheap but well worth it.

The poker room lies on an upper floor of the annex. You walk through the rest of the casino proper to get there. You then ride up a neon-ringed escalator to the poker room in its own small manageable space. A modern bar bisects the poker room. The primary poker space moved this year from one side of the bar to the other and has been re-branded as the OK Poker Room.  A few tables remain in the former poker area, alongside an area of electronic gaming devices.  There is also a small private poker room through glass doors. 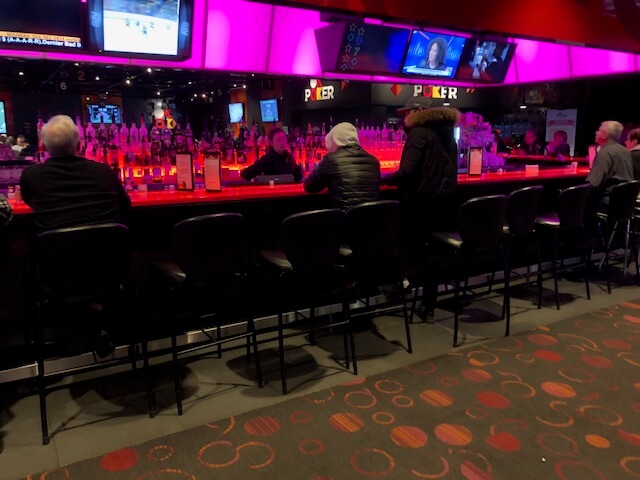 The move across the bar has made a significant improvement. Previously, the room was very dark and claustrophobic, with a low ceiling and tables too close together.  Now there is more space between tables, higher ceilings, and good lighting immediately above the tables. The general decor includes black ceilings and walls, so the general ambiance remains somewhat dark. But the comfort has definitely improved. All the felts and chips looked brand new, very clean and well-kept. Most of the chairs were wheeled, adjustable, comfortable, and not over-sized.

There are a couple of larger TVs and several smaller ones around the room. The bar with a limited menu is a nice convenience if you want to grab a quick bite before you play. One of the best features of the Casino de Montreal poker room is a self-service beverage bar that dispenses soda, coffee, juice, and water. Right across from the self-service area is a row of video poker machines, a consolation activity when your live game is not going well! 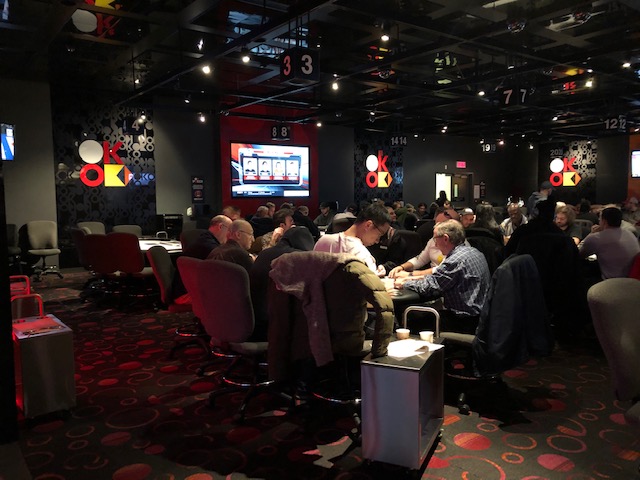 I took four years of high school French, yet I’m pretty much limited to “Oui” and “Merci.” At the Casino de Montreal, Heather and I are often the only English speakers at our tables. Thus, picking up verbal tells is not a factor. The other players might as well have been speaking Swahili. Players state bet amounts in French and are repeated by the dealers in French most of the time.  Some dealers will translate to English when they realize you can’t speak French. Interestingly, the main poker actions such as fold, call, and all-in are spoken, and repeated by the dealer, in English.

One of the larger adjustments is that the letters on the face cards are in French. Kings are R for Roi, Queens are D for Dame, and Jacks are V for Valet. Whenever I try to figure out if I have a Broadway draw, I practically mutter the translations under my breath. It’s amazing how tricky this simple change in the cards is to process.

Heather’s high school French has held up better than mine over the years. She really enjoys the challenge of playing in French and is disappointed when other players figure out that she is American and start speaking to her in English. However, she too struggles with R-D-V and can be found counting out her Broadway draws with her fingers under the table.

The dealers at the Casino de Montreal are skilled and knowledgeable and keep things moving efficiently with minimal mistakes. They tend to be informal and at times playful with players. The floors are rarely called, but are pleasant in greeting the players at the beginning of the tournament. Tournaments are very well run here overall.

The waitresses circulate with drink and food orders. Each table also has a button to call a waitress, which we find more civilized than the shout-for-the-waitress-as-she-zips-by style of other card rooms.

The players at the Casino de Montreal are generally pleasant and social with some of the widest range in skill we’ve seen. There are a few tricky players in every tournament, and occasionally some truly talented ones. But there are just as many young men  new to the game. There are also always a lot of recreational regulars out to enjoy themselves as much as exit with a win.

Interestingly, there tends to be very little alcohol consumption at the tables. No one is intoxicated and few people even order a single drink. This was true even for the tournament we played on New Year’s Eve on a previous visit. This adds to the pleasant environment and means that testy exchanges are rare.

The Casino de Montreal hosts 1 to 2 tournaments per day (at 1:15pm and/or 7:45pm). All are described as Deep Stack, with chip stacks starting in the 15,000 to 25,000 range and opening blind levels at 25-50. The regular tournament has 20 minute blinds, while turbo blinds go up every 15 minutes. All tournaments are re-entries. Like any small buy-in tournament, the structures are aggressive and you need to play accordingly.

Tournaments typically get between 60 and 100 runners. One aspect of the tournament we do not like is that buy-in occurs at the table. Every time a new player joins, the dealer has to stop to process the buy-in and present the stack. When a lot of players are rebuying, this process slows things down to an extent that is not ideal with such aggressive structures.

Every time we have been to the Casino de Montreal there are several active cash tables, generally restricted to NLH $1/$2 and $2/$5 games.

Playing poker with mostly French speakers is both fun and challenging. The Casino de Montreal provides a rich French atmosphere, yet is comfortable for the non-native speaker. If you’re a recreational player looking for a fun environment with reasonable play, the Casino de Montreal will fit your needs. Leave some time before or after to enjoy the fabulous Pavillion 67 buffet.

Playing poker in French is both fun and challenging. The Casino de Montreal provides a rich French atmosphere, yet is comfortable for the  non-native speaker. If you are a recreational player looking for a fun environment with reasonable play, the Casino de Montreal will fit your needs.