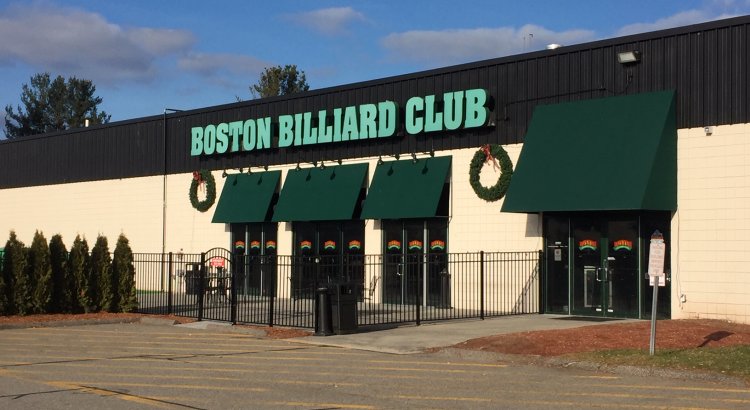 Holding down the New Hampshire poker scene at the central Massachusetts border are the Boston Billiard poker room and The River.  The Boston Billiard Club (or BBC) offers distinct advantages to the Central Massachusetts and Southwest New Hampshire poker player. Making inroads against the established Manchester Poker Room 15-20 minutes north, and the cash game venue Chasers to the east, is no easy task however. The BBC is currently seeking to broaden their appeal, revamping their website and adding a couple of new poker tournaments to their weekly schedule.

The Boston Billiard poker room is just a couple of minutes off Route 3 in New Hampshire, about 10 minutes north of the Massachusetts line.  The neighborhood doesn’t hold much promise, as The Boston Billiard Club sits in a nondescript industrial park. However, the inside of the Boston Billiard Club quickly sets a very upscale tone. You walk into the attractive open space of a large billiards room. Up and to the left is an equally attractive bar area, to the right the greeter station and then an event room with a few pool tables. That event room is particularly stunning, with elegant wood framed bookcases encircling the room. There are several comfortable chairs and couches around the main and event room. The difference in tone between the outside and inside of the BBC is among the greatest we’ve seen. Only the Playground Poker Room near Montreal even comes close.

The back of the main room features extensive casino gaming tables. None of the other New Hampshire gaming rooms come close to the number of non-poker gaming tables that Boston Billiards has. Nor likely can any match the activity we saw on our visit. There were 6 to 8 highly active blackjack tables going on a Sunday afternoon and two active roulette tables. The BBC also has a craps table, highly unusual in New Hampshire.  There were several more tables set up to support games like Mississippi Stud and Spanish 21, and two more vacant roulette tables.

While not a full restaurant, the bar offers an extensive menu of appetizers (wings, nachos, chicken tenders, mozzarella sticks, etc.) along with pizza, burgers, sandwiches, and salads. As well as seating in the bar area, there are several small tables in the front.

When the Boston Billiard poker room first opened a couple of years ago, it shared a large room with the pool and gaming tables. We dropped by shortly after opening and it struck us as very loud. Apparently, others agreed. The BBC recently walled the poker room off from the rest of the venue. Boy, what a difference it makes. The atmosphere of the poker room is much quieter and pleasant all around. Quiet, at least, other than the TVs that ring the poker room, which were turned up loud for an NFL game day. The restroom is conveniently right next to the poker room.

The BBC’s 16 poker tables are set in two long rows of eight, giving the room a long narrow feel. However, there is plenty of space around each table. The room’s black ceilings and dim lighting make it quite dark. However, the overall feel of the room is quite warm, similar to the pool room outside. There is also great targeted lighting above each table, so you’ll have no problem seeing community or other cards. 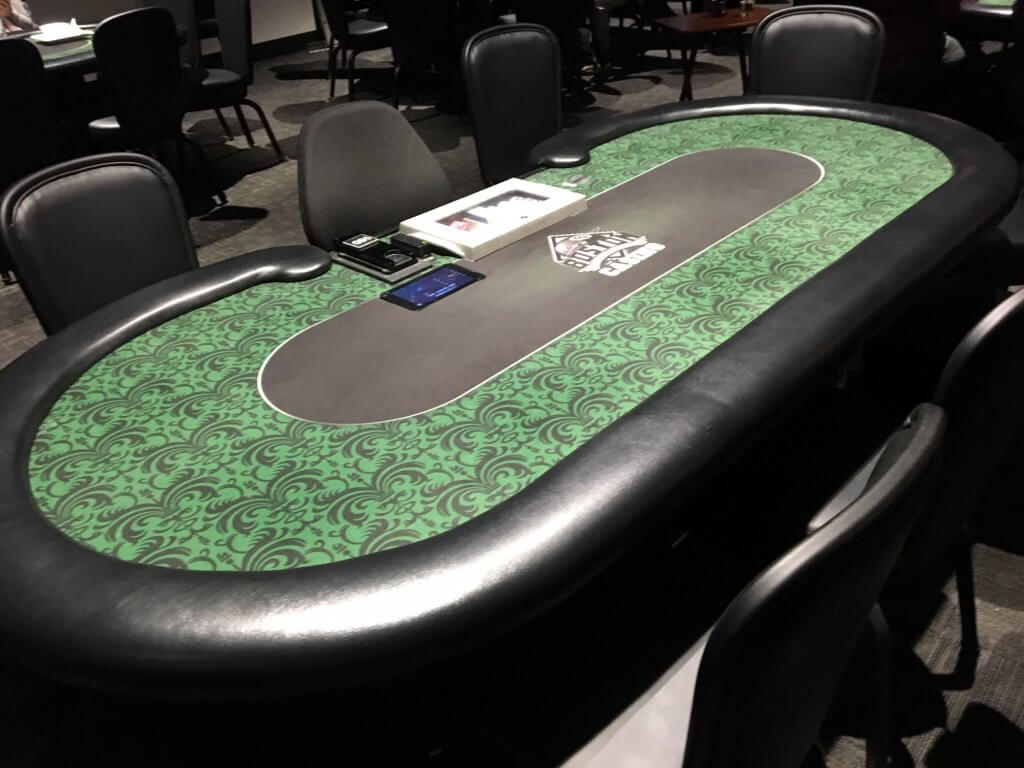 The tables themselves are modern and very clean. While the chairs were not the fancy adjustable type, they were well padded and quite comfortable. The cards seemed a bit small, but were otherwise fine. The big winners were the chips: new, bright, and spotless, with distinctly colored denominations. Several New Hampshire poker rooms offer chips in terrible condition. The BBC’s chips were so nice that players were commenting about the contrast. It is a joy to play with chips that don’t stick together and aren’t speckled with dirt, or so worn that you can’t tell a $500 tournament chip from a $5,000 one.

The Boston Billiard poker room has good, solid dealers who are quiet but friendly. No huge mistakes were made during our visit.  A couple of dealers were a bit slow, but nothing outrageous. In a room rapidly growing their base of staff and players, a few quirks are to be expected. The floor was attentive and friendly.  Even though tournaments are not Boston Billiard’s main attraction (it is more of a cash poker site), the tournament went smoothly. We recognized floor staff who have worked at other New Hampshire venues, and their experience showed.

Wait staff circled frequently and were generally friendly. Although, one player was taken aback when he tried to order a drink, and the waitress said that it was not her table and she would send his waitress over. Given there were only 5 active tables in the room, the delineation seemed odd.

We hesitate to even characterize the players in the tournament that we played. This was an individual bounty event  (i.e., one person was the designated bounty), created to try to draw a bigger than normal Sunday crowd, which was somewhat successful. The result was a fairly heterogeneous crowd. There were at least two players saying they only play cash and hate tournaments (which always goes so well). After about 20 minutes, one of them declared he was bored and bet blind UTG for 2,000 chips when the blinds were 50/100. His over-betting continued for about 15 minutes, until he tired of that. The other cash player was wild and lucky and became huge stacked, but still groused about how tournaments are a bad value.

Beyond the cash players, there was a player who projected his disgust at others’ play every time he lost a hand. There was a know-it-all or two. Several Boston Billiard off-duty dealers were also in the mix. There was more trash talking, both friendly and not so friendly, than I have seen at any room in quite a while. All in all, we found it a bit tough to find our footing with the wild social atmosphere and play.

Up until the month prior to this review, the only tournament held at the Boston Billiard poker room was on Monday nights.  It has a relatively aggressive structure: 15 minute blinds with an 8,000 chip starting stack for $50. But there is an optional $60 add-on at the first break (and a $60 re-buy option).  According to staff, that tournament gets 3 tables fairly regularly. The BBC recently cloned this structure on Wednesday nights as well.

Boston Billiard poker room also added a Sunday afternoon tournament, which is the one we played. This structure is a little slower: 15K starting stack with 20 minute blinds and no re-buy.  There is an optional 10K add-on for $50 at the first break. Although structured differently, this tournament plays a bit like its crosstown rival The River‘s weekly Sunday tournament. The day we played there were 24 players across 3 tables, but this was a special event with a designated bounty (a friend of ours). She clearly attracted some extra bodies, as the previous Sunday had only 14 players.

There were two cash tables going on the Sunday afternoon during our tournament.  Other players report that there is more activity on a typical Friday or Saturday. Boston Billiard poker room is primarily a cash venue, so that is its bread and butter.

The extremely attractive Boston Billiard poker room has great potential. This is especially true for someone looking for an experience beyond the poker tables. If you want to try out the table games and maybe even a little pool, Boston Billiard is a great environment. Of all the New Hampshire poker rooms, Boston Billiard Club feels the most like an upscale casino. They are currently intent on building their tournament and cash games. Their geographic location and superior infrastructure suggest that they will eventually be successful in this goal.

The extremely attractive Boston Billiard poker room has great potential. This is especially true for someone looking for an experience beyond the poker tables. If you want to try out the table games and maybe even a little pool, Boston Billiard is a great environment. Of all the New Hampshire poker rooms, Boston Billiard Club feels the most like an upscale casino.