The Ameristar Casino Black Hawk poker room is housed in a moderate-sized full-service casino in the striking setting of Black Hawk, Colorado.  Black Hawk and its contiguous neighbor Central City hold more than 18 casinos, four of which have poker rooms (The Monarch, Bally’s, Isle Casino, and Ameristar).

You enter the town of Black Hawk via a winding, death-defying drive. Stunning and unexpected are just two of the many descriptions that fail to do this “town” justice. Black Hawk consists of a narrow valley cut between steeply vaulted mountain faces. The entire valley is lined by casinos, one after another. Questions like “Who conceptualized this?” and “How much effort, time and money did it take to bring all the materials up into the mountains to create this gambling oasis?” snap to mind. You think building Las Vegas in the middle of a desert was a challenge? Drive up to Black Hawk for a new perspective on city creation challenges.

The Ameristar Casino Black Hawk itself is a strange venue. Initially, the facility looked nice, consisting of a couple of floors of gaming areas and restaurants in a circular format around a big atrium open to both floors. However, as you walked around there were several areas blocked off for renovation. Add to that a broken escalator and poor signage, and maneuvering around the Ameristar Casino was not easy.

We stayed at the Ameristar Casino’s hotel for our night in Black Hawk. This was a similar experience to the casino: the hotel is attractive and comfortable at first blush. But then try to find a bottle of water. The services were pretty limited. The hotel store was closed every time we went by and the vending machines were exhausted of most options.

There are four or five restaurants and bars in the casino. We ate lunch at the Fireside Grill. Despite being relatively empty, the service was very slow. The sandwiches we ate – a burger and grilled chicken – were quite good, however.  Conversely, our dinner a the Timberline Grill had excellent service, but the food seemed extremely overpriced for the relatively mediocre fare.

The Ameristar Casino Black Hawk Poker Room sits at the edge of the casino floor.  It’s completely open to the casino, separated by just a knee wall, so it was somewhat loud. Fortunately, the casino itself was fairly quiet on this Wednesday evening. There is fortunately no smoking in the casino, so that helped the air quality.

The poker room holds 11 tables of moderate size with clean felts, poorly padded rails, built-in cup-holders, auto-shufflers, and USB ports. The chips were clean and cards fairly standard. The odd kidney-bean-shaped room leads to table placement that does not optimize space well. Some tables were too on top of their neighbors, but there was sufficient space between others.

The major issues in the poker room were the chairs and the lighting. The chairs had no wheels, were not adjustable, and the padding was not great. The flex back helped a bit, but overall the seats were uncomfortable. The room was also quite dark overall. While spotlights shone on the middle of the table, the edges remained dark making it difficult to see the cards. It felt like we were playing in a cave. 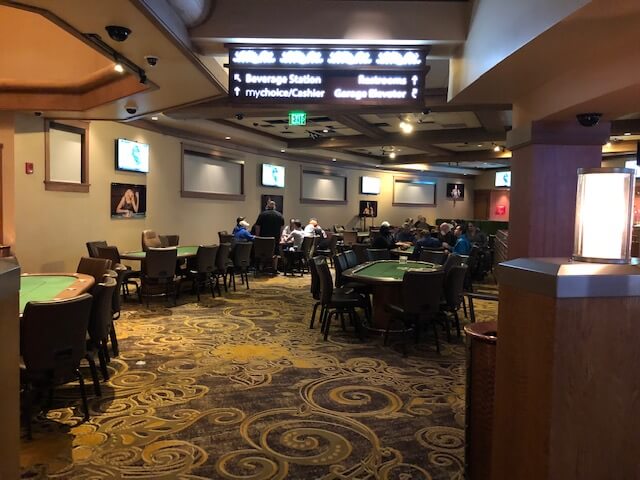 The evening that we were there, three of the eleven tables were active. A regular told me that on the weekends the tables would be close to full. The tables were playing 9-handed.

When I arrived at the poker room, the floor immediately put me on a waitlist 15 people deep for a slot on one of the two active $1/$3 tables. The floor politely said they’d text me when a seat opened up. However, he was not very informative about the expected time a slot would open, or if another table might get started (it did not). I waited around the area for a bit, but after very little movement on the waitlist, I went back to my room. It was 90 minutes before I received a text. In the 15 minutes it took to get back to the poker room,  I had missed my slot, but I was put at the top of the list now, and was seated in 15 to 20 minutes. Again, while not rude, the floor had a blasé air of one who cared little about performing his job well.

The dealer was very fast, and managed the ragged play at the table relatively well. When he needed to get some chips to fill the tray, the floor proved challenging to pull away from his conversation. The floor made light of the fact that he was slow to respond, and the dealer seemed less than impressed with the floor’s attitude.

The waitstaff did not appear to circulate much. In general, there were clearly staffing issues, which during the pandemic, and because of this remote location is perhaps not surprising.

The mix of players at the Ameristar was interesting. There was a decent age range and a few women playing. Players were fairly quiet and serious, but polite. The play was extremely loose. If a player raised to $13, four others would call. People seemed very willing to get all their money in with marginal hands or draws.

One guy seemed to have no idea what he was doing. Partially due to that, and the fact that players in general were slow to act, play was pretty laborious. I have a renewed appreciation for rooms where dealers and players work unconsciously together to keep play moving in a nice flow.  Play was ragged, moving in fits and starts, and generally not fun.

The Ameristar Casino Black Hawk poker room was quite disappointing. Plagued by limited staff, a floor that seemed to wish he were elsewhere, poor lighting, and uncomfortable chairs, this room has some work to do to even keep pace with the other three rooms in Black Hawk. Click To Tweet

The Ameristar Casino Black Hawk Poker Room is not currently running tournaments.  On the Wednesday evening that we were there, two tables of $1/$3 and one table of $2/$5 were running.

The Ameristar Casino Black Hawk poker room was quite disappointing. Plagued by limited staff, a floor that seemed to wish he were elsewhere, poor lighting, and uncomfortable chairs, this room has some work to do to even keep pace with the other three rooms in Black Hawk. The casino at large, including the adjacent hotel, needs to work on improving the space and flow for customers and the availability of goods and services. If you’re going to Black Hawk for a couple of days, we recommend look elsewhere for accommodations and your poker experience.

The Ameristar Casino Black Hawk, in general, and the poker room specifically, needs some serious upgrades.  The atmosphere in the poker room is among the worst we have experienced, punctuated by dim lighting and uncomfortable chairs. The poker room, as the casino, appears plagued by staffing limitations.